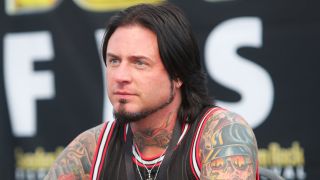 Five Finger Death Punch have already chosen the title of their next album – but guitarist Jason Hook refuses to reveal it.

Instead, he’s offered a few of the joke names they’ve considered while working on the follow-up to 2013 twin releases The Wrong Side Of Heaven And The Righteous Side Of Hell.

Hook tells Blairing Out: “I have all these funny things I’m dying to say. We’ve always thought about joke titles, like Five Finger Death Punch – Keep Your Receipt. Or, Not Our Best Work.”

The joke extends to song titles, because the band aim to complete the music before frontman Ivan Moody writes words.

“Ivan’s sketching lyrics,” says Hook. “But until they come together we name them anything, just so we can refer to it. So there’s one I just finished called Pulled Pork. By the time it gets to radio it will not be Pulled Pork.”

The guitarist won’t even confirm the album’s completion date. “We have a deadline and it’s going to be tight,” he says. “But you know what? Deadlines make for a focused work.”