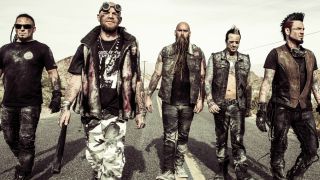 Five Finger Death Punch bassist Chris Kael admits he dreams of seeing his band reach the level of Metallica and Black Sabbath – but he concedes it could be “unattainable.”

Kael hopes they can scale the heights of the biggest groups in the business and achieve festival headliner status and says they’ll plough on to achieve their goal.

He tells Talk Toomey: “We are definitely poised. That’s never something that you would expect or say, ‘Oh, yeah, we’re gonna be the next Black Sabbath.‘ I didn’t think I was gonna be in the next FFDP, let alone Black Sabbath. But we are in a position where we’ve got a ton of fans out there. We’ve sold millions of records.

“Bands like Black Sabbath, Metallica and Iron Maiden – in my own head, that’s unattainable. Those are special bands and I definitely hold them up in high regard on the shelf.

“Would I like to be there? Fuck yes – playing those huge shows and stepping into those shoes and filling them. But that’s something you really can’t ever expect to happen. It just kind of happens. And that’s based on the fans.”

He continues: “We’re good at what we do, we’re a great live band, all great musicians. We put on a great show. We’re doing everything we can to put on a good show for the fans and get those fans out there.

“They keep on coming in droves and I always hear about us reaching new people. Even at the level that people perceive us being at right now, we’re still gaining new fans. Fingers crossed. It’s not gonna be for lack of hard work, that’s for damn sure.”

5FPD released latest their sixth studio album Got Your Six in August. The band will tour Europe with Papa Roach in November.