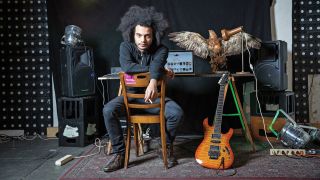 “I was on 4chan, that awful website, asking people to name genres,” laughs Manuel Gagneux, the man behind Zeal & Ardor, “and I’d combine two of them and in half an hour make a song from it. One person said ‘n*gger music’ and the other said ‘black metal’. That idea stuck with me, because those two things actually have a lot of similarities. I just tried for a long time to make it work; for a long time it sounded awful, but we’re getting somewhere now.”

Admirably shaking off the racist bullshit offered up during his experiment, Manuel went about crafting a whole new type of noise, where primitive, heartfelt blues and tinges of classic soul give way to icy cold blasts of extreme metal. It is full of warmth and harshness, stylistically utterly unique.

“I just wanted to do something that sounded different,” Manuel shrugs. “Something that makes music compelling is having fun with it. And I wanted a way of making my music sound fun.”

‘Fun’ is not usually something you’d associate with a black metal scene famed for its po-facedness.

“I’ve been a fan of black metal for a long time now,” counters Manuel. “I’m sure that was a factor. But it was more about creating something that surprised people, because everything in music has been done now. So we have to meld genres together to make anything new. And it’s fun and exciting to be surprised!”

It’s an approach that is sure to enrage many a black metal purist, but Manuel is up for the challenge. “Oh I’m aware of what I’m setting myself up for,” he grins. “There are people who like the one thing they like and that is fine. But the only way music is going to progress is through experimentation. Look at that Oathbreaker album! It’s so exciting to hear a band stretch themselves like that – that inspires me. It’s not for me to tell people how to enjoy their music, but, speaking only for myself, it’s essential that I explore as much as I can, musically. I’m sure I’ll push this sound even further.”

ZEAL & ARDOR IS OUT FEBRUARY 24 VIA MVKA