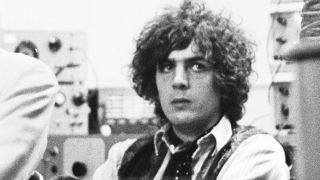 It’s a received wisdom as potent as any in rock history that Syd Barrett was the true genius of the Pink Floyd story; that his maverick inspiration was sorely missed as the group became huge-selling, stadium-filling, populists. In certain circles it’s a stance as obligatory as saying that chilly, sarcastic Lennon was more gifted than friendly, two-thumbs-up McCartney, or that Eno made Roxy Music arty and Ferry made them soft, or that Dylan doesn’t sound like a bag of cats being spayed during a hailstorm.

Such stances are wrong, driven by a dated sixth-form fear that accessible equals trashy, that listenable equals lazy. Pink Floyd were interesting during Barrett’s regime, but globally effective under Gilmour and Waters. The quirky idiosyncrasies of Bike may appeal to the inner child in us, but sooner or later it’s better to grow up and engage with the adult world. If there’s one thing that The Dark Side Of The Moon does immaculately, for all its ubiquity and over-familiarity, it’s that. It also seduces that adult world into hearing what it has to say, by sounding wonderful. Whereas Syd-era Floyd sound busy but brittle, jagged and tinny. Trying too hard. Stadium-era Floyd sound like a bath in honey, and then you realise they’re dealing with life and death.

If Wish You Were Here and Animals also manage this in parts, The Wall is not remotely mellifluous. It’s like being crowbarred into someone else’s nightmare. Yet it’s still more listenable than Syd’s acid-splattered nursery rhymes and British music hall impishness.

Later, Floyd did indeed become what many critics had prematurely cited: The Endless River, for example, is a dreary snooze of out-takes. Yet in their prime and pomp the band took profundity to the masses with something close to perfection (and a cracking light show). The Dark Side Of The Moon never ages, its textures and carefully-paced drama those of a masterpiece.

Of course, the daft thing is that nobody has fanned the embers of the Syd mythology like Floyd themselves. Via Shine On You Crazy Diamond, they’ve painted the late recluse as the lead character in their narrative. Weird, for such a bunch of narcissists. You don’t hear, say, Mick Jagger paying homage to Brian Jones too often.

One imagines Waters dreaming that one day Gilmour and Mason will write a wish-you-were-here paean to himself. Won’t happen. (To be fair, Gilmour has spoken equally glowingly of the late Rick Wright. And taking Wright’s input out of their catalogue would be a far more significant loss than removing Barrett’s.)

Don’t get me wrong, Syd’s contribution was valuable. Every bunch of young friends starting a band needs a catalyst, an energy, a flame. He was undoubtedly that. Those who attended the UFO Club gigs will swear that what they can remember of them was a blast. But of the learning-to-walk stages, it’s Astronomy Domine and Interstellar Overdrive – essentially group compositions - that survive best, while Set The Controls For The Heart Of The Sun stands up stronger than Jugband Blues.

By the time Barrett was heartlessly dumped by the sell-out careerists, by which I mean sensibly let go because he couldn’t get out of bed without tripping over, Gilmour was bringing some bedrock to the mountain Floyd were building. He’d bent over backwards for Barrett, miming for him on TV shows the madcap was too indisposed to turn up for (and later producing his solo stuff, which was like pushing water uphill).

They struggled to find their voice and pitch for a while – would a contemporary record label patiently allow them to cast around for it during Atom Heart Mother and Ummagumma? – before hitting their stride on Meddle.

Bob Klose, the Cambridge guitarist who left before Pink Floyd were Pink Floyd and now plays on Gilmour’s albums after Pink Floyd are no more, has said, “Syd was the rocket fuel, but Dave was the steady burn. I know that Roger had the creative impulse, but a great band needs a great musician. You need someone who can sing and play and do all the very musical stuff, aside from the grand concepts.”

David Bowie, who’s declared Barrett as a hero, has been keenly aware of this throughout his own career. It’s great to have big and innovative ideas. It’s even greater if you can execute them, so that they’re communicated to mere mortals who may not be on your astral plane or the same drugs as you. Pink Floyd needed a Tony Visconti, a Ken Scott, and to a degree Gilmour, Wright and Alan Parsons were theirs. There’s nothing wrong with being in tune, and indeed having tunes. There’s nothing innately uncool about backing vocalists and saxophones. It’s what you do with them.

Roger Waters, of course, is the curveball in the theory that Floyd got their act together post-Syd and “mellowed”. If anyone thinks The Dark Side… is MOR coffee-table music, they need to hear those uncompromisingly fatalistic lyrics again: they make Philip Larkin seem like a Chuckle Brother. After the perfect poise of that classic, there were leaks of toxic trauma on Wish You Were Here.

These became torrents on the straw that broke the psychiatrist’s back of The Wall. (Even there, despite all the ego-wars and arguments, Gilmour manages to slide in some Stuff That Actually Sounds Good, notably Comfortably Numb). In many ways, Waters’ indulgent primal screams are as alienating as Syd’s, perhaps more so. Yet by then Floyd were massive, so not doing the sensible thing had become a contrary statement. Context is everything.

After the Waters-Gilmour fracture, it’d be a hardy spirit who’d claim Floyd remained great. Big yes. Great, not so much. But their glory days had yielded pinnacles of popular music’s halcyon phase. Barrett’s influence flourishes in the freaks and outsiders on the margins. They are necessary and laudable, but don’t influence the centre of things.

With their youthful leader flaking out (Can you imagine how irritating he must have been in close proximity as he fell apart? Have you ever had a flatmate who didn’t grasp the basics of time and space?) Pink Floyd grew into something important and powerful. Miserable – or realistic - bastards to a man, they made melancholy cross over.

Syd may have been an imaginative, untethered man-child, but there comes a point where you have to forget about pixies and mushrooms and man up, to face money, time and the machine and deal with them. Pink Floyd graduated from Peter Pan to any colour you like. From icy waters underground to great gigs in the sky.