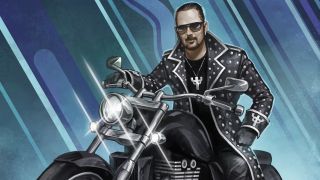 They Wrote The Rulebook

“You could say that Black Sabbath invented heavy metal, but Judas Priest defined it. That’s the most fascinating thing about them. Priest said, ‘This is metal!’ and something distinct from hard rock music. Everything we associate with metal, Priest were among the first people to do it. The leather, the spikes and all that, they took it to a different level.”

They Are Metal Icons

“In the black metal scene in Norway, we all grew up with Judas Priest. These are our heroes from that time. I’ve had the pleasure of meeting some of my idols but my nature is not to be easily starstruck or to be too fanboyish, because I relate to people as people, but with Rob Halford, even though I have spoken to him on the phone a few times and I’ve met him, so far I’ve never got past the fact that he’s the Metal God! That barrier is always there. He’s so iconic in his whole presence.”

Rob Halford Is The Voice Of Metal

“First of all, he has a very wide range. He sings very nicely in regular registers, but his falsettos are extreme. In the mid-section of A Touch Of Evil, the song stops and Halford screams ‘You’re possessing me!’ It’s so passionate and vulnerable, and yet it’s still extreme. He keeps that extremity all through the range, but the way he delivers it makes it very powerful. It’s such a multi-faceted expression.”

“I usually see hard rock and metal bands in two directions – there’s AC/DC and Mötley Crüe, with that blues rock, pentatonic riff type of thing, and that’s regular heavy metal. On the other branch you have the more diatonic metal bands like Priest, who have these typical twin guitar harmonies. I learned so much from listening to KK Downing and Glen Tipton.

Priest and Maiden both have that twin guitar thing and they both exploit that potential. For the life of me, I cannot write good riffs for one guitar, and it’s probably because of that. It would be great to write something as classic as Smoke On The Water or an AC/DC riff, but for me there’s always a minor third waiting to fill in the gap.”

They Bring Drama To Metal

“This is how heavy metal should be. I always thought that was the whole point of it! It’s supposed to be larger than life. That’s a big part of the appeal for me. I can’t pretend I do much with imagery these days, but the way I write my own music is still in that otherworldly dimension. It’s kinda sad these days, in the Twitter and Facebook age, that everyone’s so personal.

“I miss the days when metal gods were metal gods, at least in our imagination. It’s about a yearning for something greater. I guess that’s what drew me into heavy metal and Judas Priest are such a big part of that. Listen to something like Victim Of Changes, Blood Red Skies or A Touch Of Evil. There are so many epic songs. Even from Nostradamus, the song Messenger Of Death. It has that magic to it.”

“Priest have this strong pedigree and their sound is as recognisable as AC/DC, but if you actually compare Sad Wings Of Destiny to Painkiller, they’ve shown so much variety and the will to do something new. All through their career, they’ve kept evolving and you can almost tell from all the different albums that there is a true passion for a really wide range of music within that metal frame. For me personally, that’s very inspirational.”