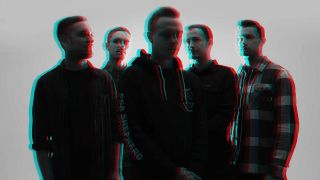 Architects are only visible with 3D glasses

Considering they are sitting on one of the hottest records of the year and have re-established themselves as one of the best bands the UK has to offer, Architects seem pretty angry today.

“Kim Kardashian posts a nude selfie, that she’s blocked off so you can’t really even see anything, and the whole world shuts down,” spits frontman Sam Carter through barely concealed distaste. “It’s no joke to say that we’re in a really bleak dark place and are about 50 years from the world destroying itself. So, you know, we could talk about that instead? But no…”

He stops and shakes his head. There’s no getting away from it, Sam Carter is pissed off.

Today Sam and his bandmates are conducting interviews from the scenic confines of Holborn Studios in East London, and the room they have set up camp in for the day is a hub of activity with journalists and photographers coming in and out. The frenzy of promotional activity is to publicise their upcoming seventh album All Our Gods Have Abandoned Us, the follow-up to the critically acclaimed return to form Lost Forever // Lost Together.

After hearing the new album it’s hard to guess where the band’s mindset might be. Musically it is a more than worthy successor to 2014’s LF//LT; full of the rhythmic juddering and neck-snapping groove of classic Architects, but with newer progressive elements and a serious increase in electronics. But AOGHAU is also a disturbingly hopeless and furiously accusatory album, one that swings from disdain about the world-at-large to moments of introspective self-loathing – so you have to worry about the psyche of its creators.

“I think it’s evidence of a band putting their ego to one side,” says Sam. “It’s like saying ‘We’re not important, this is important.’ I’m not saying that we’re going to change the world, but we’re trying to take our art and move it on to the next level.”

“People often ask me what the next Architects record is going to sound like,” adds guitarist Tom Searle, “and I tell them that I’m excited to find out. Because it all depends on us and where our mood is at that time.”

This is not to say that the two members of Architects that we sit down with today aren’t nice, polite and enjoyable company – quite the opposite, in fact – but you do sense that Architects have grown up and are not satisfied with their lot and the world around them.

“It’s interesting that you hear that,” Tom says thoughtfully, “and I think there is a lot of that on the record. We’ve tried to advocate change and hope before, and maybe it didn’t work. You get to that point where you start to question whether or not you can actually make a significant difference. I think this record might even be written to address people that won’t even hear our band, because of lines like ‘We just want to watch the world burn’, there is a lot aimed at those people.”

“The planet is in such a state,” adds Sam. “Politically, socially, environmentally – I really do think it’s too late to change it now. This record is us dealing with that, I guess. Our own place, our own guilt, calling for more love and compassion… but angry that it’s got this far.”

Lyrically the band have always been openly politicised, but it’s clear from their ambition that this is a band with itchy feet. Is the frustration in Architects as much to do with the world of music as it is the world at large?

“I love when people say ‘My favourite bands are Deftones, Meshuggah… and Architects,” Sam admits. “We look up to those bands so that’s a great honour for us. We never set out to try and sound like them, but if we can have people think of us in the same light, that’s amazing. And that’s where I see us as being a bit different to many of the bands we often get grouped in with. We just set about being the best band that we could be, not worrying about my haircut.”

So is there a frustration at your perceived place within the music scene?

Tom sighs. “It’s just a case of thinking outside the box,” he begins. “Metalcore as a genre has stagnated over the last few years, and we were as bored as anyone just going round and round in that, and hopefully we can now provide a different take on it. We just wanted to get out of that…”

Tom trails off slightly. Architects obviously don’t want to offend any of their peers, but it’s glaringly obvious that they have outgrown the scene that many people would like to pigeonhole them in.

“I understand that we are looking to move on,” says Tom, choosing his words carefully. “But I also know type of bands we play with, some of whom we are fans of and some… not so much, but almost all of them are decent people whose company we enjoy. And they’re doing what they do for the right reasons…”

“If their hearts are in the right place and they are good dudes then it’s hard not to like them,” Sam picks up. “But it’s when you hear them talking about how big they want to be and how much money they want to make. Then it’s like, no… no no no.”

And if Architects were to separate themselves from the chasing pack of identikit metalcore acts once and for all then they’d need a song like the new album’s closer Momento Mori. An eight-minute epic that swells and metamorphoses from riff-heavy banger to softly throbbing electronica and back again – this isn’t just unique to Architects, but the scene they are currently grouped within.

“I’m super, super proud of it,” Tom says. “It’s a different type of challenge to write a song like that that actually justifies its length. It’s about the intricacies and the returns to the source that make the song what it is – it’s meant to be that long. Seven albums in, you want to get to the point where you can flex your creative muscles. We couldn’t have done this earlier in our career. After The Here And Now we just changed and decided we were going to try and be the best metal band around. That’s still our aim. Why aim for being anything less than the best you can be? We went in to the studio with the intention of writing the best metal record of all time.”

“When I was sent it, I didn’t even acknowledge the runtime,” adds Sam. “I just heard it and was completely blown away. There’s nothing wrong with setting your sights high. We had never gone into the studio with such confidence before. I really felt that it was going to be great.”

And it is. Through the power of fury, Architects may well have created their masterpiece – maybe it’s time we all got a little bit more angry?

All Our Gods Have Abandoned Us is out May 27, via Epitaph Records. Architects play Download festival on Saturday 11 June.

"Our fans will be shocked!" Inside Architects' New Album