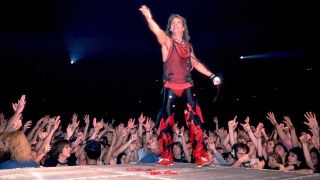 It was Vancouver, May 1984, and Van Halen were in town. One of the biggest bands in the world; their commercial powers, it would seem, having reached hitherto uncharted heights. A moment in history. Yet also a somewhat surprising turning point: not so much the triumph of a band as the dominance of an individual. It was here that I first realised Van Halen simply could not go forward as they were, because David Lee Roth was effortlessly casting a giant shadow over their future.

I was in town to spend some time in the studio with Swiss cuckoos Krokus as they worked with producer Bruce Fairbairn on new album The Blitz. I was on assignment (how professional) for Kerrang!, which of itself meant there was a problem when the Krokus caucus mentioned that we were all going to see Van Halen on May 1 at the Pacific Coliseum.

Why? Kerrang! had just published a gossipy, throwaway story of David Lee Roth’s alleged antics with Alex Van Halen’s wife on the latter’s wedding night, and how Eddie Van Halen had mistakenly thought we’d been referring to shenanigans between Diamond Dave and his own wife, and… well, the whole thing got messy, leading to reports reaching then Kerrang! editor Geoff Barton that any Van Halen welcome for Kerrang! could certainly be warm – too warm!

So I shuffled along to the show, disguised in the office executive beard and shades, hoping the ‘K’ word wouldn’t pass anyone’s lips in the wrong company. But by the end of the night, that was the last thing on my mind. I was simply stunned by two things: firstly, the astonishing, hysterical reaction Van Halen received from 20,000 crazy Canadians. And, secondly, how Van Halen live had become the all-singing, all-dancing David Lee Roth circus.

On stage, Diamond Dave dominated, as the other band members shrank ever more into the background. Part Chaplin, part Nureyev, part Elvis, part Bugs Bunny, Roth left everyone dumbfounded with his charisma, control, energy and nerve.

It was, I mumbled to Krokus vocalist Marc Storace, as if we’d just witnessed a Dave Lee Roth solo performance. We were heading backstage at the time, both of us all too aware that walls have ears, as do attentive security hogs, so we were careful not to voice such opinions too vociferously for fear of upsetting the Van Halen brothers and bassist Michael Anthony, the other three quarters of the band who, that fateful evening, seemed to represent only about 20 per cent of the whole.

But if what had paraded on stage was effectively an ersatz band, that was nothing when compared to the sight that greeted us backstage. In what had been designated a ‘party zone’, Roth had set up speakers in each corner of the room and was acting as MC, DJ, barman and general bon viveur.

Roth chose the music – which proved to be a broad cross-section of sounds old and new – and was loudly demanding everyone’s attention. Scantily-clad young ladies flossed in and out of the room; if they were lucky they got a few precious seconds of the Diamond’s attention, before being whisked off into a far-flung corner.

Drinks were flowing at a frightening rate, with bottles of Jack Daniel’s being knocked back as if a flotilla of thirsty vampires had just discovered bourbon was a damned sight better for the complexion than rhesus negative. And through it all, Roth simply did what he did (what he does?) best: commandeered the spotlight. The man was an in-your-face persona on stilts in a room full of shy, retiring metaphorical dwarves.

So far, so predictable. But this was far from a happy camp. Drummer Alex Van Halen wasn’t anywhere to be seen; he never even made a fleeting diplomatic appearance. Michael Anthony came into the room for all of 30 seconds, flashing a smile that was about as sunny as Bolton on a January afternoon. And Eddie Van Halen sat in one corner, huddled over a drink of indeterminate vintage, while occasionally muttering to band manager Noel Monk.

Was this really a band that had just taken the mainstream by the seat of its pants and given it a severe hard rocking? Why was it that only Roth looked as if he was having a ball? (And after all, I suppose it was his ball.) After about 45 minutes of watching the Roth cavalcade in full swing, I ambled nonchalantly over (well, as nonchalantly as one can when backstage with a band whose very name dripped with gold and platinum discs) and talked briefly to Eddie Van Halen. The conversation went something like this:

“Hello Eddie. You must be pleased with tonight’s show?”

Shrug of the shoulders.

“Are you coming over to tour the UK this time?”

“Dunno. Depends on the ‘walking ego’…”

At this point Noel Monk jumped into the conversation, fully aware that the ‘walking ego’ description was aimed in Roth’s direction and anxious to deflect any damage; it was tantamount to washing dirty spandex in a very public situation. But Eddie’s comment was the only time in this rather one-sided ‘chat’ that the guitarist had been anything other than indifferent. And it immediately cemented my belief that here was a band on the verge of a seismic split. Soon after, Eddie made his excuses and left the party.

Now here’s where it gets a little conspiratorial. By now, only Dave was left to entertain the mixed throng of hangers-on, groupies, record company types, the media and Krokus. Presumably the others had vacated the building? But no.

Outside in the lengthy corridor that led out of the venue and into reality, four limos were lined up, one for each member of Van Halen. I’d wandered out into this area looking for a loo, and surmised with a keen sense of deduction that, as the cars were still there the other members of the band must still on the premises. So where were they? And was it possible they were having a clandestine meeting sans DLR, because they’d reached the end of their tether with the singer?

I don’t pretend to know the answer, but the vibe from Eddie Van Halen suggested that Vancouver had proved to be a turning point in the band’s relationship with Roth. Did the vocalist care? Not a bit. Back in the ‘party zone’ he seemed oblivious to any cloak-and-dagger tactics possibly being adopted by the others. And if anyone thought he was just a mouthy buffoon stewing in his own arrogance, then they were badly underestimating him.

With hindsight, it was clear that Roth had already marked out those members of the Van Halen circle he believed he could trust and who would form part of his inner enclave. Bodyguards, assistants, roadies… the ones with him that night who weren’t treating him as the singer with Van Halen but as David Lee Roth, a circus ringmaster supreme. Whether deliberately or not, Roth was definitely making moves toward separating himself from the Van Halen pack.

As had been the case ever since the band first burst on the scene some six years previously, Roth was the man making decisions. And if the lifespan of Van Halen with him at the helm was about to expire, then that was because he’d decided to move on. Of course, as we all know, the 1984 album and tour was to be the band’s last with Roth. He used his subsequent debut solo record, the Crazy From The Heat EP, to distance himself from the mothership and go out on his own, looking to further his career both as musician and entertainer.

For a while Roth totally outflanked his erstwhile bandmates, as his garish videos and mega-watt personality promised to launch him on Hollywood.

The rest is history, and chronicles a steady decline for the man who would, and should, have been king of all he surveyed. But failure was definitely not on the menu back in that May day so long ago. Back in that Vancouver ‘party room’ Roth didn’t so much as grab your attention as grab it, shake it up and then toss it aside in favour of another plaything. But then that was David Lee Roth: a man who never entered a room when he could gust through it like a tornado that never blew itself out.

And be sure of one thing, if my retrospective theorising about the state of Van Halen back then is correct: it was Dave who manipulated the situation, not the others. Yes, it was Roth’s game. He decided when it was time to change the rules.

This feature originally appeared in Classic Rock 64, in February 2004.