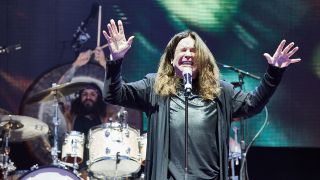 On Saturday February 4 2016, the heavy metal world mourned. In the Genting Arena, Birmingham, Black Sabbath’s mammoth The End tour came to a close, and the men responsible for the genre we love took their final bow. A bunch of working class boys from Aston turned the gloominess of working in factories for no money into a sound that has lasted almost 50 years, and influenced everything heavy. They are the alpha, the Year Zero, the Big Bang of metal, and they have inspired so many, including their Brummies from other mummies Judas Priest.

It’s no secret that Rob Halford is a massive Black Sabbath fan, he even filled in for vocal duties with the band at headline shows in 1992 and 2004. But what do Sabbs mean to the mighty Priest? We caught up with Rob Halford/Judas Priest to discuss the impact and legacy of the peerless Black Sabbath.

When was the first time you heard Black Sabbath? What went through your mind?

“When the Black Sabbath album came out and like everybody else, their sound hook me to the core. I thought this is great being a local band getting attention, and I felt excited about the dream of singing for a famous band like them.”

When was the first time you saw Black Sabbath?

“I can’t remember exactly when I saw them live, but regardless I was mesmerised by each one of them doing something so unique and intense.”

How much was their Birmingham upbringing responsible for their sound?

“Birmingham in those early years felt like a trap if you were a musician – hence the doom and gloom messages in their songs. How they felt transferred into their sound.”

How important were Black Sabbath on heavy music?

How influential were Sabbath on Judas Priest?

“In Priest we all checked out Sabbath by really listening closely. We learned a lot in the exciting ways that heavy music could be written, recorded and produced.”

What do Black Sabbath mean to you?

“Sabbath mean the start of true heavy metal to me. I still listen to the lads for the great vibes they give me as a singer and songwriter.”

What is your favourite Black Sabbath album?

“There’s a metal magic moment on every album Sabbath made, but like most fans I have to say the very first one.”

Are you a fan of the Dio era, or is it strictly Ozzy?

“The metal community well knows my love of Ronnie, and like Ozzy he can’t be beat. Having said that, with Ozzy on the mic that’s the voice from the start.”

Tell us your favourite Ozzy anecdote.

“There are way too many anecdotes to mention, but I would simply say that Ozzy is a singer who has such an honest and real down-to-earth quality that is still alive and has never changed. I have taken a leaf from his book for being that kind of man.”

Do you think Black Sabbath will play again?

“We have all heard that this is the end of touring, but like millions of Sabbath fans that can’t wait to see them again I know we all feel good that the real end has not happened.”

You can read the amazing story behind Priest’s Turbo album – as well as the final ever Black Sabbath interview – in the new issue of Metal Hammer magazine out tomorrow, February 10.