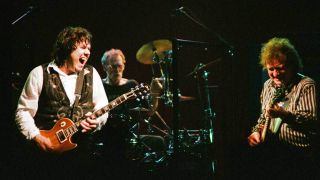 When Gary Moore joined Jack Bruce and Ginger Baker in the ‘ersatz Cream’ BBM in 1993, it was a dream come true for the guitarist – but one that was over almost as soon as it began.

We tell the full story of the short-lived and bumpy ride of Baker-Bruce-Moore in Classic Rock 243, and we’ve reproduced an excerpt below, in which the trio enter the studio to record their debut album…

It all started calmly enough. The new band went into the large residential studio at Hook End, Berkshire. And as a present for Ginger, Gary’s team managed to track down Ginger’s old Ludwig double-bass-drum Cream drum kit on sale in a drum shop in North London. “Ginger walked in,” said Gary, “and he was just freaked when he saw it. But he didn’t end up using it because it didn’t sound as good as his modern kit.”

Gary did have concerns, though, when Ginger first arrived at the studio, as producer Ian Taylor explains: “Ginger had been paid a lot of money for the session, flown in from America Business Class and so on, and he turned up with hands full of cuts and calluses. Turned out that Ginger had been building fences for his horses and his hands looked like a stockman’s.”

He also had a whopping great bump on his head. Apparently he had been doing a spot of roof repairs on a windy day. He tried to grab his hat as it blew off, forgetting that he was holding a hammer at the time.

After they ran through some Cream songs to warm up, “we started putting down tracks and it was very easy,” Gary said. “There was no problem at all. It was really fun and I got a great insight into the chemistry between Jack and Ginger. It wasn’t what I thought at all; they weren’t at each other’s throats. I think Jack really looks up to Ginger, and Ginger knows it, so he’ll never tell him he’s any good. They’re like two brothers, just winding each other up.

“One day I said to Jack: ‘Can you ask Ginger to play the hi-hat pattern like he did on Born Under A Bad Sign?’ ‘No way. I’m not fuckin’ asking him. You ask him.’ So I just pressed the button in the control room and asked him to play that pattern and he said: ‘Yeh, sure, man. No problem.’ And Jack looked at me speechless. They were just like an old married couple. It’s just the way they were.”

Ian Taylor agrees that, for the most part, and given the egos, it was remarkably plain sailing.

“We did have one problem over timing with Ginger. For some reason we were using a click track on Where In The World, and Ginger just couldn’t or wouldn’t get on with it. It can be a problem for the older drummers. I remember the contacts sheets back from Virgin, it was such a strong image.”

It was also the most amazing juxtaposition: rock’s Grade-A curmudgeon in a long black coat, smoking a fag, presented as a heavenly celestial being – one of rock’s classic album covers.

The album, Around The Next Dream, was released on May 17, 1994 at the start of the tour. The whole vibe about a possible Cream reunion, and the fact that half the songs clearly had their Cream antecedence, gave the critics ample ammunition for comments along the lines of: ‘They couldn’t get Eric, so they got Gary instead’, which was a world away from the truth.

Gary recalled that one interviewer actually asked him: “Have you always wanted to be Eric Clapton? And now you can be?”

“And I thought: ‘No, fuck off.’ And then Ginger chimed in with ‘Gary plays like Gary. Eric plays like Eric.’”

Jack also found the ‘ersatz Cream’ jibes very irksome: “We deliberately wanted to nod towards Cream. It was around the time when Oasis were copying The Beatles, so I thought: ‘Why shouldn’t I do a copy of me?’ So it was very deliberate, and I thought it worked very well.”

Some reviewers did buck the trend: Q magazine concluded that the album was “satisfyingly well rounded… which proves that BBM are not Cream re-formed with one notable omission, but a credible band in their own right.”

Even the ever-astringent Charles Shaar Murray, writing in Rolling Stone, felt that improved recording techniques gave this band a sound that was “bigger, cleaner, rounder and more defined than the often fuzzy, scuzzy, overcompressed Cream”, and thought Gary had out-Gibsoned and out-Marshalled his illustrious predecessor.

Despite all the carping, the album sold well in Europe and got to No.9 in the UK chart.

Taken from the brand new official Gary Moore biography I Can’t Wait Until Tomorrow. Only available in the forthcoming BMG Gary Moore: Blues And Beyond box set. Buy it from Amazon.

How The Blues Saved Gary Moore