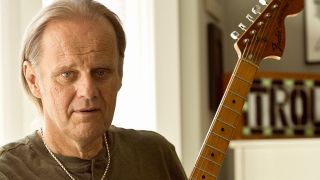 Born in Atlantic City in 1951, Walter Trout survived a troubled childhood with an alcoholic stepfather thanks to his discovery of the blues. Relocating to the West Coast in 1974, his guitar skills saw him pinball through sideman gigs with John Lee Hooker and Canned Heat, before a mid-80s tenure with John Mayall’s Bluesbreakers set him up for an enduring solo career. A reformed drug addict and alcoholic, Trout’s wild years seemed to have caught up with him in 2013 when he was diagnosed with liver cirrhosis. A transplant saved his life and enabled him to carry on performing, as heard on the current Alive In Amsterdam album.

Very shy. I was artistic. I was not good at sports. Being the kid playing a trumpet to the neighbourhood on his front porch, the athletes at my school bullied me. It made me really dislike sports, because ninety per cent of the jocks were total fucking assholes.

What do you think of Spotify?

It’s another way people can get music and artists get nothing. Some people say to me, “Hey, I found you on Spotify and now I’m your fan,” so in some ways that’s good. But there’s part of me that goes, “Well, you can listen to me on Spotify all day now – and I don’t make shit.”

Did you see your old liver after it was taken out?

Well, of course I was unconscious. I was on the Michael Jackson juice. But my wife convinced the surgeon to take a picture. He also took a photo after they put the new one in. The old liver is like this brownish-yellow lump, covered with crust. It’s fucking disgusting. And the new one is beautiful and bright red. It looks like a piece of very lean beef that you would find in a butcher’s shop.

Two things. I’m most proud to be the father of my sons and to be married to Marie. And then my legacy of music. As a kid, I wanted to be a musician, and when I’m gone, I’ll be able to leave behind a library of music that says, “I was here. I existed.”

Have you ever pretended to be somebody else?

There were a few times in Eastern Europe with the Bluesbreakers, and Mayall would say to me, “Walter, I have a phone interview today at three o’ clock but I feel like taking a nap. Will you do it?” And I would do interviews as John Mayall. Because a lot of those people, they could barely speak English. They’d call on the phone and I’d do the interview in my really shitty British accent. But these guys were like Russians and stuff, so they couldn’t tell.

There’s one very well-known musician who knew me back in the dope days who will still not speak to me, even though I’ve changed my life. I ran into him in LA, and he doesn’t even want to talk to me. He won’t shake my hand. I don’t know what I did. So he has this misconception that I am still the person I was in 1975. And I’m not. I’m not out on the streets chasing drugs and ready to sell anybody in my life for a hit of heroin. That’s not me any more.

What’s the worst job you’ve ever had?

Boy, I’ve had a lot of them. I was a trash man. That was horrific. It was a summer job in 1969. I showed up the first day and this old Italian guy looked at me and said, “Are you any relation to Ed Trout?” That’s my older brother. It turned out that in high school, my brother had impregnated this guy’s daughter. He treated me fucking horribly. Everybody else got to ride on the truck, but he made me run next to it.

I have felt some higher power at work in my life. When my wife was pregnant with our second son, Michael, she had a dream at seventeen weeks that she was losing the baby. We went to the doctor and he said, “This kid is coming out. There’s nothing you can do. You’re losing this one.” We came home. We were not religious. But we said, “If there ever was a time to attempt prayer, this is it.” We went back the next day and the guy said, “I don’t understand this but the dilation has gone down and the sac has gone back in.”

What’s the strangest place you’ve ever spent the night?

I once slept in a kennels on tour: in a cage that was three feet high, about four feet long and two feet wide, full of dog hair and dog shit.

What would you have as your final meal?

Spaghetti and meatballs. I love spaghetti, but after my transplant I can’t eat high-potassium foods. The medication I’m on makes me hold on to potassium, and too much potassium will stop your heart. But if I knew I was gonna croak anyway I’d eat the spaghetti and that would stop my heart. And there I go.

My definition is being able to do what you love, make your living at it. When I was on the trash truck, the word ‘work’ filled me with fear and revulsion. But now it means ‘go play and sing’. And that fills me with joy and hope and sunlight and happiness.

Walter Trout: To Hell And Back