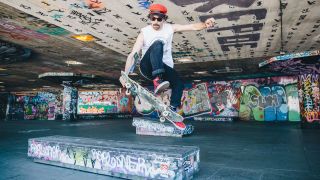 CKY are no strangers to skate culture, having spent the early part of their career soundtracking skate videos and of course the connection to Bam Margera and Jackass. But what attracted the CKY guys to skateboarding in the first place and how important was that relationship with the world of skateboarding to their success?

We headed to London’s iconic South Bank Skate Park with the the band to find out.

Following an early afternoon session at the park, we talk to CKY about their debut releases only being available in skate shops, being signed to skate/surf brand Volcom, and hooking up with Tony Hawk for video game soundtracks and tours.

And while the band’s hardcore skating days might be behind them, they still managed a kickflip or two!

CKY’s new album The Phoenix is out June 16 via Long Branch Records, and is available to pre-order now from iTunes.

The 11 best Clutch songs, as chosen by CKY