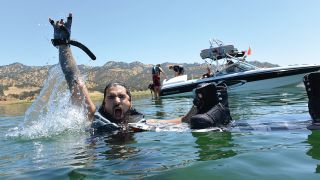 Wakeboarding looks sick! How did you get involved?

“Around 1998, I went on a houseboat trip with some friends of the family, and they had a wakeboarding boat. I’d never done it before, but I was like, ‘This looks fucking awesome.’ You’re out there on a boat all day, drinking beers in the sun and hanging out with friends. I was like, ‘Where have you fucking been all my life?!’”

Was it easy to get started?

“Not even close. The first day that I tried it, my friends tried to pull me up out of the water 40 times. And I couldn’t get up! My arms were beat to shit and I was pissed off and frustrated… So the next day I got up and I thought, ‘I’ve got to get out in the water. I know I can do this, and once I get up out of the water, I’ll be able to do it.’ I tried 15 more times, and I finally got up on the 15th time. Once I got up, I ended up riding for, like, five minutes – it was like getting pulled by a dog on your skateboard. It was awesome.”

“Oh, dude. I can’t even explain the fucking agony that I was in the next day. I remember going to practice two days later, and I went to get out of my car, and I lifted my left leg out, and my entire back went into spasms. I was trapped halfway out of my car, going, ‘Jesus fucking Christ!’ It was a sweet pain. I was hooked.”

Have you had any injuries from wakeboarding?

“Lemme tell you, man, falling on that water at 25mph? Fuck… I’ve gotten concussions. I’ve been knocked out! Or you faceplant unexpectedly, and that hurts like crazy. You get water behind your eyes and up your nose… But then you can fall the other way, on your butt, and you don’t really put it together until it actually happens, but you can get a fucking wake enema! Ha ha ha! Water just goes up your ass, and you’re like, ‘What the fuck?!’”

So it’s hard to learn and it crushes your body. Um… what’s the upside?

“For me, it’s like a reset button. I start doing it and it’s like the world goes quiet. If Machine Head’s driving me crazy and stressing me out, or something else is going on, my friends and I just do the lake trip and you’re just hanging out, drinking beers, having fun wakeboarding and chilling on the lake. It seriously makes everything better. And it’s a challenge.”

So just how good are you?

“At this point, I think I’ve peaked with my wakeboarding skills. Now I’m doing more wake surfing. I’ve just kind of mastered that, where I can let go of the rope and surf the wake. It’s so much fun. It’s not the same as wakeboarding; you’re not doing as many tricks, but it’s a new challenge that brings me to a zen place.”

On a scale of 1-10, just how metal is wakeboarding?

“Wakeboarding’s pretty metal, man. It’s tough. It takes a lot of fucking core strength, you can get injured pretty badly, and it’s exciting. And it’s fun as shit, but there’s a high danger factor that makes it even more thrilling. So on a scale of one to 10? What would 10 be?”

Holy Grail guitarist Alex Lee is a yo-yo expert, and he ranked that hobby as a 10…

“Well then, wakeboarding is a fucking 12!”

British Water Ski & Wakeboard’s On The Edge programme offers lapsed or new riders the chance to get stuck in across six sessions. For more info, head to www.bwsw.org.uk, and to find clubs visit www.wakehq.com.

Produced by Wakeboarding Magazine, Quiet, Please. is a badass love letter to the sport, featuring an all-star cast. You can watch segments at www.wakeboardingmag.com or download it from iTunes for £7.99.

To see world-class riders, head to the Wakeboard World Championships, organised by the World Wakeboard Association (www.thewwa.com/worlds). There are also tons of events closer to home – check out www.bwsw.org.uk.

Machine Head: How We Made Unto The Locust