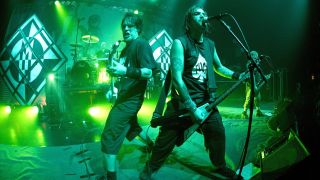 WHEN AND WHERE WERE YOU BORN?

IS THAT WHERE YOU GREW UP?

WITH A WHITE PICKET FENCE?

“Not out the front no! I had a big ass lawn that I had to mow every week. I got a couple bucks for that. My mom grew up on a farm so I inherited a chore list, from doing the lawn to taking the newspapers out or doing the dishes. I didn’t moan about it though. I was very blessed with my upbringing, and so I just thought that was what normal kids were supposed to do.”

DO YOU HAVE ANY SIBLINGS?

“I have a sister who’s three years younger. The relationship’s awesome now. She was adopted when she was one, but she looked so much like me that when we were kids people would say, ‘Oh that must be your sister?’. I’d go, ‘Yeah, but she’s adopted.’ [Laughs, with a shamed face.] I was pretty honourable as an older brother though, very protective. So it was a pretty normal brother-sister relationship really!”

WHEN DID MUSIC START PLAYING A PART IN YOUR LIFE?

“My mom’s sister lived next door and I had two cousins. One a year older and the other four years older. Ron, the older one, had Ted Nugent, AC/DC and the Kiss Alive record, and that’s when I got into heavier music, ‘cos of Gene Simmons blowing fire and spitting blood. That was the heavy stuff.”

DID YOU FIND AN EXCUSE TO PAINT YOUR FACE?

“Yep, fifth grade talent show. We were Kiss, but I had to be Paul [Stanley]. I knew all the words but there was another kid who loved Gene more than I did, and he had all the moves down and the long tongue. So I had to be Paul, which I wasn’t happy about ‘cos I fucking hate Paul. ‘Let me at least be Ace!’. We also used to put on concerts in my back yard with cardboard guitars, and as the big finale the smoke go off, with the fire crackers on the ends of the guitars, and we’d jump in the pool.”

WHEN DID YOU ACTUALLY START LEARNING TO PLAY?

“I was about 11 and it was Angus Young who made me want to play AC/DC songs. I saved up $21 and my parents said they’d match whatever I could save from my paper route. So for $42 I bought the guitar and started learning how to play. I had a few lessons and was then self-taught after that. Angus was very responsible, but then a year later Randy Rhoads came into my life. He was definitely the one.”

WERE YOU OBSESSED WITH MR RHOADS?

“No, not in a Brann Dailor from Mastodon kind of way, but I had a lot of respect for him. He had a cool story, and then after he died in the plane crash [March 19, 1982] he became legendary. He just had a different style and didn’t sound like anyone else. He rocked it onstage and he was going off in every picture that I saw of him.”

DID YOU ASPIRE TO PLAY THE GUITAR FROM THE BEGINNING?

“I’d thought about drums but I saw that that entailed too many pieces, that you had to get so much crap. I just wanted to jump around rather than being stuck behind a kit.”

WHAT WAS YOUR FIRST PROPER BAND CALLED?

“I was 15 in high school and we’d get together to play covers of Judas Priest and Scorpions. We found someone to play drums and started jamming at his house and then I started writing songs. We were called On Parole, after the Motörhead song. Dublin was a hotbed at that time. There was a band called Rampage, with Chuck Billy [Testament] being the singer, and his brother was around as was one of their roadies Steve Souza – who then started singing for Exodus. We asked him to be our singer. He changed our name to Metal Warrior – which isn’t as good! And his brother played bass for us at the time. I was writing lyrics – ‘answer the phone/‘cos I can’t get over you’ – stupid stuff like that. So in high school, we’d play the quad at lunchtime and then started playing the local clubs when I was 16-years-old. 130 pounds and really skinny, looked 12, acne, bangs, feathered hair, Spandex…”

HOW DID YOU MEET ROBB FLYNN – BY JOINING VIO-LENCE OR DID YOU START THE BAND TOGETHER?

“I joined Death Penalty – which included Chuck Billy’s brother Ed and some other guys – and we became Vio-lence straight away. I became the songwriter, re-writing all the music and lyrics, and we started playing the scene with Death Angel, Legacy [who became Testament], DRI and all the local Bay Area bands. We had interest from Disaster Records, so I needed help writing some music. We played right around the corner from Forbidden Evil – Robb’s band at the time – so we’d go over and see him play. ‘Their guitar player’s awesome, and he’s got a hot girlfriend too!’. So we approached him, ‘cos we wanted him in the band. He was writing Vio-lence type of songs anyway, rather than Forbidden’s more melodic style. He was more edgy. They didn’t want to let him go, so we straight up stole him!”

DID HE FIT STRAIGHT IN?

“Yeah, and we started writing together. The first record was pretty much written [Eternal Nightmare, 1988], but he contributed a song to that and then on the next record [Oppressing The Masses, 1990] it was just him and I geeking out. It’s weird, ‘cos we’re not the closest of friends, but we’re really close as far as playing is concerned. We’re brothers and it’s a great chemistry where our styles are really similar. We know where harmonies are coming from, where one of us will go. It’s a very complimentary style that we have, and it started on that second record. It spurned the competition. We started pushing each other, but it was never a selfish thing. We never tried to make the other one look stupid. We learned a lot from each other too. Robb’s a sponge and that is why he’s such a good writer and structurer of songs. So that second record was the one that pushed us.”

DID VIO-LENCE SPLIT UP OR DID ROBB LEAVE YOU?

“Robb left. We were 22-year-old kids, we made so many bad business decisions. We wanted all these things. ‘What do we have to do to get a tour bus?!’. We ended up doing another record [Nothing To Gain, 1993] that was so commercially dumbed down that it was a shallow version of the band that we once were. We got dumped by the label, and Robb was sitting at home and he needed to be playing. So he got his buddies together, asked if he could do both, we said no and he said, ‘OK, well I’m off to do this then’. And that’s how Machine Head started. I still wanted to make Vio lence happen but people in the Bay Area just weren’t into thrash anymore. Soundgarden was coming, Pantera was in and people wanted to groove.”

HOW LONG DID VIO-LENCE LAST AFTER ROBB LEFT?

“A couple of years. I was a huge Machine Head fan so I was really happy for him, but I did wish that all that was happening to him was happening to me. So anyway, Vio-lence’s singer quit, and you can’t be the band you were without your singer, so I took all the other guys and we basically became a Machine Head cover band called Torque! I started down-tuning when they did and followed what they were doing. We put a self-titled album out on Mascot Records in 1995 and got to play the Dynamo Festival in Holland in 1996. Looking back, it’s now cool to have a record with me singing on it! I was freshly married at the time, I didn’t want to be touring and I could still do the local thing. That’s what I wanted.”

AT WHAT POINT DID YOU WANT TO BE IN A BAND AGAIN?

“I thought I was done with music, and I was certainly tired of being the, ‘Hey dude, here’s my demo’, guy, but a singer I knew wanted me to give him some guitar samples, creating music with Pro-Tools and all that. It was exciting and new! Then we got a drummer, a keyboard player… We became a band. It was like Fear Factory meets Tool, and we were called Technocracy and we started doing local stuff. It started blowing up and I got the itch a little bit. But that was fine. I was still married… We put the record out in 2000 on Mausoleum, and around this time the Thrash Of The Titans benefit was about to happen, for Chuck Billy who had cancer. So we were asked to put Vio-lence back together, and we asked Robb to join us. He said maybe, but that didn’t work out.”

SO VIO-LENCE GOT BACK TOGETHER?

“Yeah, we started doing some reunion stuff as people wanted to see us again. At the time my marriage was rocky at best. She was going to school, I was doing music and we didn’t really see each other. It came to a point where I had to choose between the two. When Machine Head lost Ahrue Luster and they needed a guitar player for a few weeks [July, 2002] and they were interested in me, I was interested in them, so I proposed it to my wife. I said I’d do two weeks with Machine Head – we were playing with Slayer, headlining Full Force… I’d never done a thing at that level – then I’d quit music for good. That would give career closure, but it just happened to be that I’d miss her birthday and our anniversary…”

AND THAT WENT DOWN WELL?

“She agreed, at first, but then a week before I was due to go she changed her mind. I didn’t think I could not do it by that point, so I went out with Machine Head anyway. When I came back, my marriage went to shit. It just never recovered from that. I think that it was done by then anyway…”

AND THEN YOU JOINED MACHINE HEAD FULL TIME?

“They’d been writing Through The Ashes Of Empires as a three piece at that time and weren’t looking for a guitar player, but I decided in my mind that this was what I wanted to do. My wife was the one for me, so for whatever reason that didn’t work out, then I’d take Machine Head as my consolation prize. They write the kind of songs that I like, and being in this band is good, so at least that aspect is covered.”