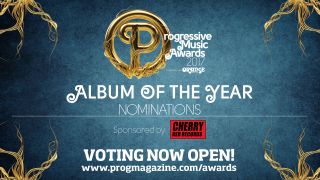 This year’s Progressive Music Awards takes place at London’s Underglobe on September 14. A night when the great and good of the progressive music world convene to discover who’s been at the top of their game for the last 12 months. Back in 2014, Transatlantic, who also performed live that year, walked away with the Album Of The Year award for their Kaleidoscope album. You can watch footage of them picking up the award below.

You’ve still got time to vote in this year’s Progressive Music Awards, which is now in its sixth year. Below is a list of all this year’s nominees in the Album Of The Year category. We cast our eye over all the albums that we’ve reviewed over the past 12 months, and painstakingly whittled it down to a list of the that we believe are the most impressive. You can cast your vote for your favourite here.

Keep your eyes peeled for more action from the Awards vaults over the next two weeks.