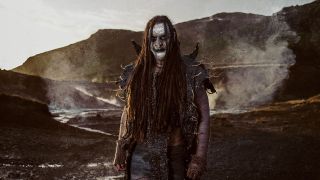 Norwegian king of dungeon synth, Mortiis is premiering his latest video exclusively on Hammer. The video for A Dark Horizon follows the gore-splattered video for the song Visions Of An Ancient Future released earlier this year.

The man behind the goblin mask, Håvard Ellefsen, spoke to us about the new equally gory video:

"For the A Dark Horizon video I decided to team up again with director Ari Savonen in order to create a similar dark and mysterious mood we previously captured with the Visions Of an Ancient Future video.

"That first video symbolised the re-awakening of Mortiis (era I) which is continued by the new video so to speak.

"Shooting conditions were intense, I had just come off a flight from Poland where I played a couple of shows and went straight to the set in Finland where winter had clearly arrived.

"Since we were shooting in an abandoned old factory and my new outfit basically consists of pieces of latex on my upper body, spending hours filming in a chilly factory environment basically meant I was freezing my butt off pacing around half-naked trying not do die.

"The things I do in the name of art…”

The track is taken from forthcoming album Spirit Of Rebellion, a modern reimagining of Ånden som Gjorde Opprør (the ex-Emperor bassist's 1994 out-of-print solo album) and will see its release on January 24 via Omnipresence Production/Dead Seed Productions.

Watch the exclusive video below:

Mortiis will be returning to North America for an Era I headline tour, supported by avant-garde black metal hybrid T.O.M.B.