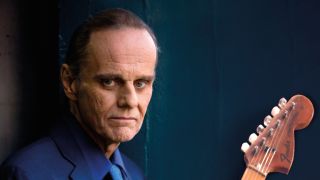 Walter Trout has spoken exclusively to Classic Rock about his recovery from the last-gasp liver transplant that saved his life. The American blues-rock guitarist, 63, is still hospitalised after suffering some post-op complications but in a first interview since the surgery Trout reveals that his health is slowly improving.

“Around a month ago I woke up to find I was bleeding out of my butt,” he reveals. “Over the next 20 minutes I lost all of the blood in my body – they had to replace 13 pints – and went into a coma for three days. After that I had this thing called an encephalopathy, which is temporary brain damage. I couldn’t speak English and didn’t know who I was or recognise anybody else. Basically, I was a vegetable and that condition lasted another six or seven days. I should have been dead at that point.”/o:p

/o:pHowever, Trout survived. His body did not reject the new liver (he’s unaware of the donor’s identity). He is beginning to regain weight and his faculties are returning. He’s even jovial enough to make a quip about his surname.

“My biggest problem is recovering from the surgery because I’ve been filleted like a fish… hey, there’s a joke for you,” he laughs. “So my sense of humour is back but I need to work on my strength because after losing 100lbs I don’t have enough muscles in my forearm to bend a [guitar] string. I don’t know if I’ll ever get back to where I was before, but I’m going to try.”

Touchingly, Walter breaks down and sobs when reminded that a fan-organized YouCaring campaign and various concert tribute events raised $245,000 towards his healthcare.

“Did I know that I was so loved?” he muses, choking up. “No. And I was a little overwhelmed to discover that I was.”

Trout plans to recuperate for the remainder of 2014 but has given his blessing to Danny Bryant, a prodigy from Hertfordshire, to undertake a tour of America using Walter’s backing band in August. Together they will perform material from The Blues Came Callin’, a new studio record released under Walter’s own name in June.

He explains: “Besides being one of my dearest friends Danny is a great artist who’s starting to come into his own, so my band, who depend on a paycheque, gets to work, and I also help to get Danny going [in America]. It’s a win-win situation.” /o:p

This interview is a follow-up to a feature that appeared in issue 13 of Blues Magazine. This is available to purchase online. /o:p

The Blues Came Callin’ is available via Provogue Records. Rescued From Reality, an official biography co-written with Classic Rock’s own Henry Yates, is out via MLG Publishing.

Footage of Trout jamming with the then 17-year-old Danny Bryant back in 1997 can be seen here:/o:p