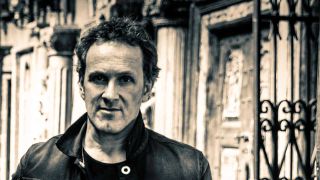 Guitarist Vivian Campbell has had a very distinguished career. Since 1992, he's been a member of Def Leppard, with who he'll be inducted into the Rock And Roll Hall Of Fame in Brooklyn on March 29. He's also with Last In Line, the band who began as a tribute band to Dio but have just released their second album of original material, II.

Campbell started out with NWOBHM hopefuls Sweet Savage, before getting a big break when being chosen as the first guitarist with Dio, and then signing up with Whitesnake at the height of their commercial power in the late 80s. He's also worked with Lou Gramm, Riverdogs and Shadow King.

Last In Line's II is out now. Here, Vivian chooses the 10 records which have helped to shape his life and musical sound.

“My older sister Fiona and what she listened to was a big influence on me when I was very young and just getting into music. It was through here that I got into T. Rex. Seeing Marc Bolan on Top Of The Pops on a Thursday evening as a kid was my first true exposure to a rock star.

After seeing him, I wanted to grow my hair, wear my sister's clothes and get a Les Paul. And listening to The Slider, well it's has incredible songs like Telegram Sam and Metal Guru. That made a major impression on me.”

“At Christmas in 72, my cousin gave me a copy of this album as a present. It was the first record I ever owned. Live In Europe had only just come out, and this was proper rock, not pop nonsense. And it was Rory who fired me up to want to be a guitarist.

"With Marc Bolan, it was all about the whole package, but this man was such a great musician. And this is a live album – and onstage was always where Rory was at his best.”

“It was at Christmas 1973 that the same cousin who gave me the Rory album now introduced me to southern rock. And for a while I was really into the whole southern rock style. The three guitars, a classic like Free Bird... it really won me over.

"But when I listened to other southern albums I realised this band and album weren't typical of the genre, but they represented the very best of that style of music. The cream of the crop. Nothing else comes close. I was 11 years old and on a journey of guitar discovery. And this made its mark on me.”

“I am a massive Lizzy fan. Everyone knows that. So I have to put this album into my selection. A song like Don't Believe A Word is of course timeless. But then every track on this album is special.

"There are so wonderful moments from Brian Robertson on guitar, with the riffs and solos, which really bring out his talent. And those dual guitar moments with Scott Gorham still startle me.”

“I know this isn't strictly rock. But she was someone I had a teenage crush on. I saw her on Top Of The Pops and loved what she did on Wuthering Heights. That was unlike anything I'd ever heard before.

"I was mesmerised by her voice as well, even though my mum hated it. Kate Bush had a unique sound and to this day I am a big fan of hers.”

“I know for most people, it's all about the classic era of Purple and the Mk 2 line-up. And I was aware of them, because my sister had Fireball, and I would sneak into her room to listen to it when she wasn't around. But my best friend Ray Haller, who was in Sweet Savage with me, had this album, and lent it to me. We even did Love Child live in Sweet Savage.

"I love the funk influence here, and this really turned me on to Tommy Bolin as a guitarist, and the band also had two great vocalists at the time, with Glenn Hughes and Lord Coverdale. But it was the way they mixed rock and funk that got my attention.”

“I got into this because whenever my sister got annoyed she'd storm off to her room and play it – very loudly! So, it got my attention, even though I didn't want to like it, because it was part of the punk era.

"However, The Stranglers were not strictly punk as such. I thought Hugh Cornwall had a lovely guitar tone, and the songs were very strong. They had a powerful and enticing sound all their own.”

“I got into Free through discovering Bad Company. There was an obvious musical connection between the two bands. But I must mention Mick Ralphs. I think he is incredibly underrated, and whenever I listen to what he did on Straight Shooter, it reminds me that he deserves a lot more respect than he's ever been given. And of course there are also some wonderful songs on this record.”

“Lizzy are such an important band in my life that I have to pick second choice from them. It was a very close run thing between this and Black Rose: A Rock Legend.

"Both have a monumental impact on me. In the end, I've gone for Live And Dangerous because it came out a year earlier. Nobody should need to be told how amazing it is.”

“I cannot stress how important Rory Gallagher is to me. I saw him live at my first ever concert, my second ever concert and my third ever concert. Not many bands came to Belfast, so it was a treat to see him close up quite often in my younger days, This is my favourite Rory studio album.

"And while people always associate him with the blues, when you listen to something like Do You Read Me, there's definitely a little funk in there. As I said earlier, funk always appealed to me. Ronnie James Dio once joked that I came from the black side of Belfast, even through there wasn't such an area in the city back then. That summed up my love for funk.”