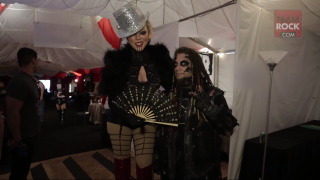 While in Columbus at Rock On The Range we caught up with Maria Brink and Chris Howorth from In This Moment for a quick chat.

After the internet was set ablaze by the band’s Sex Metal Barbie video, Maria discusses the influence their online haters had on the band that led to the song’s creation. Although it turns out the band no longer read the negative comments unless they feel like having a laugh.

Plus Maria reveals how she juggles her onstage persona and being a mother, and that all of her art is run by her son first.