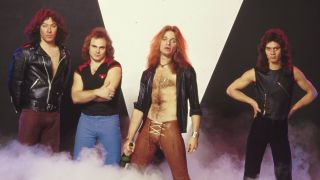 From their earliest days in Pasadena, California, party rockers Van Halen honed their not inconsiderable chops by performing tons of cover versions. They nicked songs from every era and every style, yet always added their special VH sauce – that inimitable mix of Eddie Van Halen’s unique guitar-playing and David Lee Roth’s cheerleading vocals – to make them their own. Here are the 10 best VH covers for you to rock out to…

The Who classic gets a working over on the Live: Right Here, Right Now album. Not a bad version, but not a classic either, as Sammy Hagar’s stadium-rocking vocal inflections don’t really capture the intensity and bitterness of Who frontman Roger Daltrey’s original effort.

Eccentric Englishmen The Kinks originally recorded this typically ‘60s piece of whimsy, but in the hands of VH it becomes a much bigger, punchier affair, throwaway in a good way. One of five covers recorded for the Diver Down album, the song was presumably recorded with a large amount of tongue in cheek, because this version sounds like a band at its absolute stadium-straddling happiest.

The Humble Pie ‘drug bust’ classic was a brave early choice for Van Halen, as, on paper, David Lee Roth’s vocals are no match for Steve Marriott. But the man’s sheer live chutzpah helps him just about carry off what is a surprisingly enjoyable version of this classic mid-paced rocker.

Another cover from 1982’s Diver Down album. It’s doubtful that Roy Orbison imagined a video interpretation featuring two dwarves manhandling a transvestite when he first released the track as a single in 1964, yet that’s what VH chose to do to represent their surprisingly faithful arrangement. Eddie’s guitar flecks do add something new, though, to make this something of a kitsch pop classic.

It’s no surprise that VH looked to vocalist Sammy Hagar to replace David Lee Roth in 1985, for in their early days they clearly followed the hard rock blueprint laid down by Hagar’s first band, Montrose. This cover of the 1973 Montrose classic is an early live version recorded at LA club Gazzarri’s. It doesn’t vary much from the original, but it sure shows just how hot a guitarist EVH was right from the get-go during an extended workout in the middle of the tune.

You can find the original of this slow blues strut powered by a soulful vocal from singer Lowell George on Little Feat’s 1972 album, Sailin’ Shoes. On 1988’s OU812 album VH took the blueprint, then slowed it down the teensiest bit to make it even more sleazy. And any rock song that features Chairman Mao has to be good, right?

An early ‘60s R’n’B tune by Clint Ballard Jr. became a 1975 US Number One hit for Linda Ronstadt. In contrast to the bitter lyric, Ronstadt’s version is almost jaunty. But on VH II, the quartet make the tune a whole lot nastier, riding a throbbing beat and adding interesting multiple harmonies to get to the song’s true meaning. Roth piles up those trademark yelps for an indulgent interpretation that definitely works.

A perfect example of how to take a classic song and add your own touch. The original Martha Reeves and the Vandellas version was a huge 1964 hit and defined the classic Motown pop sound. In the hands of Eddie and co. it becomes a different beast entirely, a surprisingly modern-sounding dance rock mash-up. Is that a sequencer we hear? Or Eddie masterfully controlling the song’s rhythmic thrust with nothing but guitar? Hard to tell, but it’s an ambitious interpretation that really hits the spot.

Blues guitarist John Brim originally recorded this sticky little number in 1953, though it wasn’t released until 1969. Nine years later VH took the original, plugged it into the mains and delivered a delightfully cocky, supercharged interpretation. Roth’s lascivious vocal tees the tune up perfectly over a deceptively gentle intro, before Eddie finally pushes the ‘go’ button and unleashes the mother of all boogie riffs, then blows the roof off with a ridiculous solo that just can’t be licked!

For many, this Kinks song invented heavy metal. Maybe so, but on Van Halen’s incredible debut album Eddie’s guitar sound, the tightened-up riffing and squealing licks make the original sound soft and flaccid in comparison. Roth’s cocksure delivery, an undeniably enjoyable case of style over substance, only goes to affirm the band’s ‘fuck you’ attitude. And the breakdown section, which features a girl sounding suspiciously close to orgasm, is simply the icing on the cake.