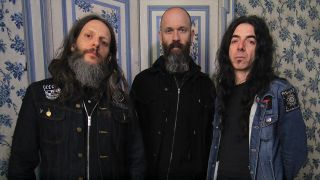 Future legend tells of a band so heavy that their instruments are played via remote control from an orbiting spaceship. With his fictional band Disaster Area in The Hitchhiker’s Guide To The Galaxy, Douglas Adams may have predicted the questing cosmic metal of Italian trio Ufomammut, whose live shows are psychedelic space rituals – Hawkwind spaghettified as they pass the event horizon.

With their eighth album they condense that dark matter. Their time-stretching, long-form psyche vortices of sound have been chiselled and sculpted into eight monolithic slabs of progressive sludge.

“We focussed more on the way songs should go one into the other, and how to create a full fluxus of music,” says bassist and vocalist Urlo, coining a word from its Latin root meaning ‘flow’.

“We put the songs together little by little and then we tried to shrink what we had, to focus more on the impact of the album,” he elaborates.

Ufomammut formed in 1999 and are well-established as pioneers in the extreme metal scene, a categorisation that doesn’t do justice to their outré and unique aesthetic.

“A lot of magazines write that we are doom. When it’s heavy and slow, it’s doom. We don’t know what doom music is,” laughs Urlo. “We don’t listen to doom metal. The two bands that we all agree were great are The Beatles and Pink Floyd.”

Drummer Vita expands on this definition of the pigeonhole. “You could say Pink Floyd were doom sometimes,” he theorises. “If I think about doom I think about slow or sad music with a kind of atmosphere. Atom Heart Mother, for example.”

The trio grew up far from the Italian cities to which other music fans would gravitate, and have stayed put. “In the middle of nowhere!” exclaims Vita. This isolation informs their esoteric sound.

“We have to invent,” muses guitarist Poia. “It’s the only way we know.”

However, there are indeed influences in their music from their country’s prog heritage, something which the drummer thinks was unjustly overlooked at home. “In the 70s, Italy had a lot of [prog] bands,” he says. “In a way they were connected with British prog bands. For example, Osanna from Napoli or Delirium from Genoa were connected with Van der Graaf Generator and King Crimson. Unfortunately, the Italian prog scene wasn’t recognised in Italy as a real scene. In England or the United States or Japan, Italian prog is a big thing. They didn’t have what they really deserved at that time.”

“Le Orme, Area were really peculiar bands. Different from other prog bands,” Urlo expands. “Morricone has been a great influence for us. The atmosphere he creates is something we’ve had inside us since we were children watching spaghetti westerns and gangster movies, which are connected to bands like Goblin or Osanna with the movie Milano Calibro 9. These movies had progressive soundtracks.

“We also try to create something that is Italian but ours,” he concludes. “We’ve tried to reach that since the beginning – to be ourselves and not a copy of someone else.”

Sounds like: “A big cosmic brain screaming from the middle of a black hole.” – Poia

Current release: 8 is out September 22 via Neurot