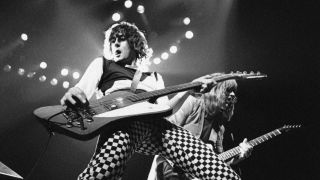 UFO? Aren’t they the band who drank and drugged for England, that everyone says should have been mega but were too out-of-it too care?

These 10 albums, though – a bit tasty, presumably?

Mostly. These are the ones recorded for Chrysalis Records, five featuring the German wunderkind guitarist Michael Schenker (Phenomenon, Force It, No Heavy Petting, Lights Out, Obsession), four on which he was replaced by the equally-gifted Welsh party animal Paul Chapman (No Place To Run, The Wild The Willing And The Innocent, Mechanix, Making Contact) and one with, er, “Atomic” Tommy McClendon.

If only. Misdemeanour is probably UFO’s worst album. I’d rather listen to either of the much-maligned two “space rock” albums made before ’74, and all of the ones made since they reformed (with various line-ups) in 1992.

You got that right. The four that effectively bookend their glory days (Phenomenon and No Heavy Petting with Schenker, plus Mechanix and Making Contact with Chapman) are patchy but even these have platinum-class highlights. The other five (Force It, Lights Out, Obsession, No Place To Run, The Wild The Willing And The Innocent) approach classic status.

Stunning guitar solos, irresistible riffs, streetwise lyrics and great melodies. I think they used to call it songwriting. The focal point throughout is Phil Mogg on honeyed vocals. And there’s some serious powerhouse drumming by Andy Parker on the first nine, too. Plus – as you’ll discover – the band’s songwriting matures and evolves gradually… On the first couple of albums in this box UFO are a four-piece, though keyboards made a tentative debut on 1975’s Force It, and became a permanent fixture from No Heavy Petting (a slight step back, released the following year) onwards. The big leap forwards came after adopting the criminally under-rated Paul Raymond for 1977’s Lights Out, because he was great on keys rhythm guitar and new exactly when to swap one for the other. (Neil Carter, taking over on three of the later albums, did the same – but less spectacularly as the material suffered after Raymond had left.)

Didn’t UFO have a nutter bassist, too?

You mean Pete Way. He’s all over the first eight, but not on the last two of these – having blowtorched both ends of the candle to put himself out of a job. But it was great while it lasted.

Okay, I’ve spent the last 40 years with my head in the sand thinking owning only the Strangers In The Night live album was enough. Why should I now take the plunge?

Well, admittedly, you’ve got of the best songs there but you are in for plenty of very pleasant surprises from many, many songs not on the Strangers set list … But the main carrots this time are firstly the price (just over £30 online for the physical product – 10 albums in cardboard slipcases, boxed – a few quid less for the MP3s); and secondly the audio quality. These versions are the gold standard Rock Candy remasters (2007-09) including most of the 45 the bonus tracks (six live cuts have been omitted) – although minus the booklets and essays.

Come round to my place to listen to my UFO collection so we can nail who’s better: Schenker or Chapman.

I’ll bring Pete Way and a six-pack of Special Brew.[](https://www.youtube.com/watch?v=Lwe7ZEJ8QrY)