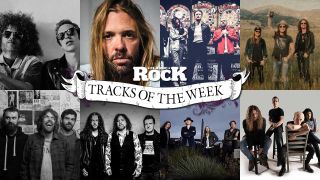 Hello folks, and a warm welcome to our weekly rundown of the best new tunes cooking away in the great casserole of rock. As ever the winner will be decided by you guys (vote for your favourite at the foot of this page), and last week you voted these guys into your top three:

Congratulations to The Struts, who soared to victory with a performance Bowie would no doubt have enjoyed! Enjoy another spin of their lovable, live-in-Paris cover below, then check out this week's selection and get voting.

Remember the early 00s, when rock’n’roll was dominated by the likes of Wolfmother and Jet? And then they sort of...went away? They’re back! Well, Wolfmother are back, with Jet drummer/singer Chris Cester guesting, and they’re sounding rather excellent. Fans of both bands will find much to enjoy here, boosted by the maturity that presumably comes from a decade or two since your breakout hits (god doesn’t that make you feel old…).

Taylor Hawkins & The Coattail Riders - Get The Money

There’s more to Taylor Hawkins than drumming with the Foo Fighters – much more, if the dizzying range of sounds on his upcoming solo album is anything to go by. This ambitious slice is a strange but beguiling mix of reggae swagger, dreamy alt pop and Zappa-nodding rock. It’s also stuffed full of celebs; Chrissie Hynde swings in on vocals, Duff McKagan on bass and Joe Walsh on guitar.

Palace Of The King - Move Through The Fire

The Cadillac Three - Back Home

Never let it be said that there is anyone more Southern than The Cadillac Three. Every Southernism you could imagine works its way into this latest taste of the Tennessee trio’s upcoming album, Country Fuzz. Crucially, though, they strike just the right balance between tongue-in-cheek self-awareness and genuine love for this world they grew up in. Expect Dixie-baked tales of whiskey, Hank, propane, blue jeans and much more.

Proudly defying easy categorisation for 11 odd years now, Welsh noisemakers Dead Shed Jokers know how to make compelling, angular music that burrows deep into your head and sets up camp there – without you having a clue how they’ve actually done it. Feel Some More by turns encompasses oddball prog, smart indie rock, jutting alt-rock, dreamy balladry… It’s probably simplest if you just listen and see for yourself.

Tygers Of Pan Tang - Damn You!

From music that keeps you guessing to some that absolutely doesn’t – but in the best way possible. Back in the day the Tygers looked poised to cruise into the NWOBHM ranks of Maiden, Saxon and co. This obviously didn’t happen, for various reasons, but there isn’t a shred of bitterness or clinging onto nostalgic in this bracing, hard-rocking cut from new album Ritual.

Twisty, hallucinogenic hoodoo from darkest Yorkshire, courtesy of garage punks Avalanche Party offers any indication. A dark, psychedelic yet hooky whoosh of gothic allure, woozy guitars and atmospheric electronics, it's elegantly unhinged stuff. Like what you hear? Check out more on their new album, 24 Carat Diamond Trephine, on sale 22 November.

Much of these Californians’ material has been informed by singer Josh Katz’ anxiety and panic disorder. The video for this new one, though, is a narrative saga showing the life of a homeless man. It’s a hard watch in places but very worthwhile, and most importantly the song is a winner – emotional, original, heavy and hooky all at once.