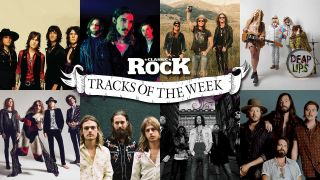 Eight tunes, eight shining examples of rock’n’roll circa 2020 – from classic rock singalongs and rootsy rabble-rousers, to psychedelic collaborations and quality weird shit. Expect beloved veterans, brand new faces and everything in between. The winner, as ever, will be selected by YOU using the poll at the foot of this page.

Or at least, that’s what normally happens. Those of you who tuned in last week may have noticed that there was no poll through which to cast your vote. This is because we are idiots, and can only apologise unreservedly. We were probably still hungover from Christmas. It won’t happen again. Hopefully.

Still, onwards and upwards into this week’s list; check it out and vote using the poll at the foot of this page (it is definitely there this time!).

When Atlanta renegades Biters went on indefinite hiatus a year or so ago, we suspected their main man would be back with something before long. One of those born-to-rock old souls in a millennial’s body (part Noel Fielding, part Stiv Bators), Tuk Smith is on gloriously glam, guitar-chopping form on this first single with The Restless Hearts. Expect rose petals, ruffle shirts and Thin Lizzy-esque twin leads – plus the kind of chorus that you’ll be singing under your breath for the next year.

So here’s a thought; what if the Beatles smoked a tonne of marijuana with Supergrass, and decided to make a record? And then performed it in some scuzzy basement punk club? We don’t know in what universe this would’ve actually happened, but this groovy, squelchy new tune from Brighton-based alt rock mavericks Demob Happy is one indication of what it would’ve sounded like.

The Cadillac Three - Hard Out Here For A Country Boy

TC3 have sang about being from the South before, and by god they’ll keep doing it – until someone physically stops them. Still, when they do it so damn well, we’re not complaining. This particular, boot-stomping cocktail of sun and daytime drinking haziness honours the slowed-down lifestyle afforded in their motherland, where chicken wings and cold beers aren’t so much tasty treats as a way of life. S’all good y’all...

Next up it’s the new concoction from LA twosome Deap Vally and psychedelic stalwarts The Flaming Lips – compressed it makes ‘Deap Lips’, y’see? Accordingly we’ve got woozy guitar fuzz, acoustic strumming, vulture screams, lyrics about ‘dragons of madness’ and forced auto-tune vocals from the Lips side. It’s tripping balls, natch, but melodiously so.

The Dutch trio’s latest album Tascam Tapes was recorded on the road for 'less than $50, but it sounds like a million bucks!’ In less passionate hands this next-level-DIY approach could have backfired horribly, but DeWolff have the optimum balance of youth, daftness and beyond-their-years experience to pull it off. Nothing’s Changing shows off their minimalist analogue approach with jabbing guitars, tinny beats and cheap yet oddly warm 70s synths.

The Darkness - In Another Life

Abbey Clancy co-stars with Justin Hawkins and co in this latest piece of The Darkness’s excellent Easter Is Cancelled. It’s one of the album’s softer, sweeter moments but no less driven or more-ish for it. In a way it’s also the closest thing this record has to a pop hit that’d sit comfortably in today’s mainstream (because life is unfair this probably won’t happen) – albeit with unashamed classic power ballad oomph. Lush.

Manchester up-and-comers Gorilla Riot make like Alice In Chains at a doom night – with part of the core rhythm from Pink Floyd’s Money – on this louche shot of filth and grungy flavours, elevated by a choppy gear-changing bridge and classy, bluesy guitar solo. Like what you hear? Check out more on their new album Peach.

The expression ‘does what it says on the tin’ was made for songs like this one from A Thousand Horses (Four Blokes Plus Touring Musicians was less catchy). It is a song about drinking, for drinking, in the key of drinking… If all of Blackberry Smoke still drank – and spent more time in the contemporary Nashville scene than hanging with Skynyrd – this could have been the result.