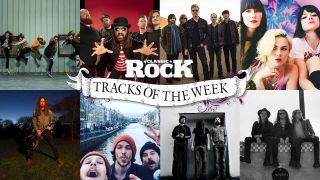 Dive into your post-bank holiday week with eight of the best new rock songs, handpicked from a sizeable long-list by Classic Rock. But which one is the best? You tell us, by voting for your favourite using the poll at the foot of this page.

Last week you declared Samantha Fish the winner, with Fantastic Negrito in second place and Primal Fear in third. Check out Fish’s victorious track, Dream Girl, then get stuck into this week’s shortlist, ingest the delights therein and vote for the one you deem the mightiest. We love ‘em all, but we want to know what you think….

Just like the opening of some all-the-rage podcast or talk show, we’re kicking off with something hooky, stylish and instrumental. Only of course this bouncy, brassy brew of 70s funk, blues, jazzy jabs and southern-fried soul is way better than that. Most of the Texas Gents have played in churches at some point, and collectively they began as a hotshot studio band for a mix of singer/songwriters, all of which bubbles to the surface here – creating bursts of Little Feat, the Beatles and the Wrecking Crew.

Pre-order the new album, Floor It!!!

Massive Wagons – Banging In Your Stereo

The second single from Massive Wagons' upcoming record is a sunny, holiday season blast of shout-along vocals and megawatt riffs, thickly spread like Nutella on homemade banana-bread (Lockdown Ed: 'banana-bread?? Dude, that is sooo Week Three...'). Plus: LEGO!!! Like, ALL the Lego! Besides the band themselves you'll find (among other things) Superman, Batman, Darth Vader, Noddy Holder, pirates, a shark, a load of knights... It's probably best if you watch it and see.

The Jayhawks – This Forgotten Town

The prettiest, sweetest hybrid of bittersweet pop and alt-Americana now, as the Jayhawks seamlessly blend keys, pedal steel, gorgeous harmonies and rootsy guitars. “This album feels like a new lease on life for us,” explains Gary Louris. “I don’t know what the future holds, but this band is full of great songwriters who deserve to be heard, and my only regret is that we didn’t do something like this sooner.”

Cruel Hearts Club - Blame Me Too

Listen up 90s fans; we might have just found your new favourite band. On Blame Me Too these Aussies-turned-Londoners juxtapose the sort of gnarly, sweet, bitingly cynical and gauzy alt-rock qualities that punctuated the likes of Garbage, Elastica and Hole. The video exudes a tearaway, don't-give-a-shit attitude, but make no mistake; there's a keen ear for en-pointe tunes at work here.

Toby Jepson - I Won’t Be With You

I Won’t Be With You dates back to the mid-90s, when Jepson was still fresh from the painful split of Little Angels. "I channelled my anger, confusion and sadness into writing and recording what I now realise is my darkest work to date,” Jepson says of the song (it appeared on his 1995 solo debut Toby And The Whole Truth, which is now being reissued). Since then he’s become one of rock’s enduring journeymen, but this brooding earworm (an under-the-radar number on its initial release) marks him out as a grade-A contender from the beginning.

Noisy, freaky and thumpingly hooky, this frenetic burst of weirdo psych rock is the creation of Austrian trio Mother’s Cake. Think King Gizzard & The Lizard Wizard and Demob Happy, shaken up in a soda can, and you've got the gist. Perhaps the inside of your head has felt like this at times, in recent weeks? Either way, if you find yourself flagging a little this week, this is the bracing internal reset you need.

Aaaaand now we’re slowing down with this deliciously ponderous, Sabbath-esque haze of doomy stoner and proto-metal vibes. If your post-70s tastes lean towards the likes of Graveyard and Kadaver, Mountain Witch are totally your bag (of course they are; they’re called Mountain Witch for god's sake…). Like what you hear? Check out this and more on their upcoming album Extinct Cults.

Something fun and fierce to finish with. Canadian trio King Bull have found their holy grail in the sweet spot between Iggy Pop, Diamond Dogs-era David Bowie and the 00s guitar wave. Sweet and slightly mad, with a flash of a snarl across its face, The Depender is an energetic summation of all this.