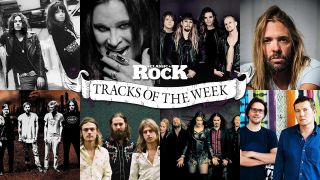 Hello all, hope you're doing splendidly, and welcome to another edition of Classic Rock's Tracks Of The Week. We've got a delectable selection for you today, from blues to AOR to progressive melancholy disco (never let it be said that we're purists at TOTW...), but before that let's have a look at the bands you voted into last week's top three:

1. Status Quo - Running Out Of Time

Congratulations to the mighty Quo, who romped to victory with Running Out Of Time! Well played also to Marisa & The Moths and Naked Six on first-rate second and third place entries. We'll look forward to seeing who sways your votes this week, but first off, a victory spin for Rossi and co...

The Last Internationale - Soul On Fire

We saw these guys opening for Rival Sons the other week, and were won over by their garagey coolness, razor-blues guitar and tearaway charisma. This is one of their softest and...well, most soulful moments without slacking on the heaviness. Think primal old-school blues, as dreamed up by the White Stripes and Florence Welch.

Ozzy Osbourne - Under The Graveyard

He might have cancelled all remaining shows for 2019, but that doesn’t mean the Prince Of Darkness is about to hang up his cloak and microphone. The verses and lyrics of this new single are eloquently bleak and tender, though the chorus riff is pure Sabbath – fat, groovy and deliciously woozy – and the whole thing climaxes in a wall of fuzzy oomph. Ozzy at his most sensitive, but still rocking? Lovely.

Now for lightning bolts, big-ass synths, chest-thumping man-feelings and a chorus the size of a house… It can only be the latest tune from Swedish AOR bright sparks H.e.a.t, harking back to the 80s with a level of charm and commitment matched by few of their contemporaries. Top guitar solo, too.

Taylor Hawkins & The Coattail Riders - I Really Blew It

The Foo Fighters drummer-come-solo maverick continues to reveal the weird, wonderful depths of his musical tastes outside his day job. And who better to do it with than Jane’s Addiction frontman Perry Farrell (who joins in here on vocals)? Hawkins has credited Jane’s as the band that “made hard rock weird and interesting again”, and it seems he’s picking up the torch with this gloriously odd yet inviting new material.

The Dutch trio’s new album was written on the road for less than fifty euros. But that doesn’t mean it sounds like a budget job. Well, it does... but only in so far as the audibly lo-fi production and lack of their standard Hammond organ and full-fat guitars are concerned. This new single in particular (lyrically inspired by the Cormac McCarthy novel of the same name) is pleasingly sassy and groovy for this approach, even sounding a bit Bee Gees-y in the falsetto harmony bits.

Like a bit of symphonic metal in your life? Or just fancy seeing/hearing something that will be more bombastic than anything you've seen today? Step forward, Nightwish. Floor Jansen towers above her bandmates like Xena Warrior Princess leading a full-on World Of Warcraft assault – on a stage seemingly bathed in fire and lights – while guitars and synths blast out with laser-cut precision. Too much, you say? Per-lease...

We've thoroughly enjoyed the renaissance of Jack White and his merry garage rock men, as they've returned to what they do best – making proper rock'n'roll. Besides being one of the sweeter moments on the record (with acoustic-strumming Zeppelin and Beatles-y sensibilities galore) this new cut features a video shot at Wisconsin's amazing House On The Rock.

A bit of a curveball for you now – or rather, a curved disco-ball... or something... Anyway, it's the new slice from no-man's first album in 11 years. The long-running partnership between Tim Bowness and Steven Wilson has long shied away from conventional genrefication, but even for them 'progressive melancholy disco' is a new frontier. Imagine Pink Floyd mixed with Tears For Fears, by Giorgio Moroder, and you're in the right ballpark.