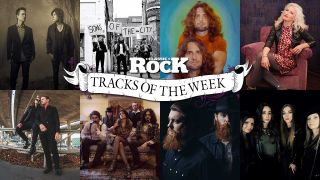 Looking for some new music to kickstart your week, but don’t know where to begin? Classic Rock is on hand with eight of the very best new rock tracks, from both A-listers and fresh faces. Fancy hearing the latest Stone Temple Pilots single? Or the new one from up-and-comers Naked Six? Or Heather Findlay’s Zeppelin-esque new turn? It’s all here, plus much more. And YOU decide which one’s the best.

This is who you voted into your top three last week:

3. Hollywood Vampires - I Want My Now

Congratulations to Ryan Hamilton and co, who soared to a comfortable victory with Won’t Stop Now! They were followed by No Fit State and the Hollywood Vampires in second and third places respectively.

Check out this week’s selection, then vote for your favourite using our poll at the foot of this page. But first let’s listen again to last week’s champions...

Jeff Gutt settles further into his own identity as STPS’s frontman on this tender, classy new ballad. The moodier, more contemplative end of the band’s palette shines delicate but bright acoustic strumming, heartwarming piano lines and uplifting melody. The full new album, Perdida, is out in February 2020.

Naked Six - Song Of The City

Seb (son-of-Biff) Byford and co keep things short but very sweet on a boot-stomping new shot of dirty rock’n’roll that swings and crackles with early 00s guitar band flavours, cocksure swagger and all-round lust for life. Like it? Find more on the album, Lost Art of Conversation, which is due March 2020.

The Moon City Masters - Break Through

Plenty of millennial-gen rock bands draw from the 70s. Listening to this sweet, beautifully harmonised ‘choon, however, you can’t help wondering if The Moon City Masters think it still is the 70s. And that’s not a bad thing; especially not if the idea of Little Feat partying at a glam night (and distilled into just under three and a half minutes) appeals.

Crunchy, acoustically powered classic rock – complemented by tasty electric lines and a caseload of Fleetwood Mac and Led Zep III vibes – from former Mostly Autumn singer Heather Findlay. If you weren't sure about her previous, folkier incarnations, do check this out; it's a change of tone that suits her.

The Swedish duo return with this driving, blue-collar slice of their upcoming sixth album, set for release in the new year (made with Hives producer Pelle Gunnerfeldt). Shot in their "used and abused" rehearsal space in Stockholm, its one of those contemporary rock songs that manages to feel slick and polished without sacrificing on raw energy.

If you enjoy the psychedelic vibes of Rosalie Cunningham, and also like a bit of soul, classic rock and proggy organ-whirling in your life, you'd do well to acquaint yourself with this Italian group. The fact that it's all enveloped in a spirited sense of decadence makes it all the more enjoyable.

Singer Rebecca Downes joins the luxuriously bearded sibling duo on their latest  mash-up of chunky blues rock and hip-hop sensibilities. Warning: contains the kind of refrain that'll stick to the inside of your head like glue (in a good way).

Tequila Mockingbyrd - Drunk When I Told Ya

We were sad to hear that these guys were calling it a day – after several years and a lot of good-time tuneage – but at least this rocked-up sea shanty-style headbanger (a gleefully frank ode to the perils of drunk-dialling, just in time for the ultimate season of such antics) sends them out on a high. Thank you T-Byrds, and good night.