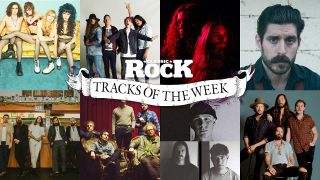 Eight new tracks, eight bands, eight different shades of rock'n'roll. Which one deserves to be crowned the winner? The power lies in your hands.

Last week Slaves To Humanity secured the first-prize spot, followed by Harriet Comfort in second place and Cherry Truck in third. Well played to all three of them, and especially to our winners.  Check out their victorious single Behind My Back, then see what you make of this week's shortlist (not forgetting to vote for your favourite at the foot of this page).

Get stuck in, and get voting.

Gore and glam make unlikely but oddly effective bedfellows in this noisy, snarling boxer-jab of punk and prime-cut late 70s/80s rock. Propelled by frontwoman Kimi Shelter (the lovechild of Joan Jett and Johnny Thunders, with a more colourful wardrobe) it's a bloody, boisterous racket you can sing, dance and stick two fingers up to whatever's pissing you off to (Trigger warning: self harm, blood).

"This is 30. We’re still here. We’re still dirty." Thus reads the tag line for the LA rockers' commanding new single, released in tandem with frontman Josh Katz's actual 30th birthday. Mixing slick, punchy pop-laced rock with an evocative, on-the-nose story of growing up (or at least growing older) in the 21st century, it's an enticing omen for their forthcoming second album.

Crown Lands - End Of The Road

One of our favourite tracks on this Canadian duo's upcoming album, and perhaps their moodiest, most Led Zeppelin-esque moment yet. The song pays tribute to the many "Indigenous womxn, girls and two-spirits" who have gone missing or have been murdered on Yellowhead Highway 16 in British Columbia (known as the Highway of Tears).

Leopold And His Fiction - It’s How I Feel

Get ready to party like it's 1973 with this dose of boot-stomping, glammed up rock'n'roll with gutsy notes of Iggy and the Stooges. The brainchild of Detroit native Daniel Leopold and his hip-shaking posse, it comes with bags of catchy attitude and a shedload of muppets. Yes, muppets. What's not to like?

Bristol's IDLES are on brilliantly subtle, thought-provoking form, on this latest taste of the follow-up to 2018's Joy As An Act Of Resistance, ULTRA MONO. Frontman Joe Talbot says: "A Hymn is a hymn that rejoices in the sinister flesh-eating virus of the pedestrian. It sings the tune of normal's teeth sinking into your neck as you sleep stood up with your eyes open. Amen.”

A pensive, sweetly Beatles-esque number from Portland's masters of intelligent Americana-come-pop-come-rock songwriting. Smart yet wonderfully soothing music for these strange times, it's an exquisite cocktail of rootsy warmth, absorbing lyrics ('I was smoking dope with Lincoln in a Chrysler on the hill' frontman Eric Earley sings) spaced out moments and flecks of bright sunlight.

Singer/songwriter Mark Holley has teamed up with a new rhythm section for the new Black Foxxes record, of which this sprawling, hard-hitting epic is the first taste. Says Holley: "Badlands was recorded together, live in a room. The 9 minute takes felt like marathons and pushed the three of us to our limits; it perfectly captures the tenacity of our new recordings…”

Buy or stream the song I Band updates, merch and more.

A Thousand Horses - A Song To Remember

“A Song To Remember is about being stuck in the purgatory of heartbreak and dealing with the rollercoaster of emotions that comes along with it,” says guitarist Bill Satcher, of the latest heartwarming anthem from Nashville's countrified foursome A Thousand Horses. One of those arm-swaying singalongs you could readily imagine being played in arenas, while retaining a dive bar-friendly sense of contemplation intimacy.