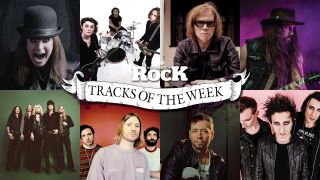 In the market for some new music that rocks? You've come to the right place. We've listened to heaps of newly released tracks this week, and narrowed it down to these guys for your listening - and judging - pleasure.

Last week Stereo Pharoah romped to victory with Tinnitus, with the Blinders in second place and Ryders Creed only just behind in third. Check out this week's shortlist and vote for your favourite at the foot of this page, right after a victory spin of last week's winners.

Following a global album launch and tattoo extravaganza, The Prince Of Darkness proves that the actual music on (upcoming solo record) Ordinary Man comfortably holds its own. Scary Little Green Men starts with steely, blissed-out rings of atmosphere before beefing up into a head-nodding earworm of a chorus. Introspective oddball values, tailored for the big time.

Raging, contorting and punching out riffs like Nirvana moshing with The Vines, the Manchester-based trio (fronted by Seb ‘son of Biff’ Byford) lay down just over two minutes of thick, seething guitars and roared guttersnipe meditations on the smartphone age. And then, just like that, they’re gone again, leaving dust and ringing ears in their wake.

Dinosaur Pile Up - Round The Bend

Bouncy alt rock with woozy distortion and a somber thematic core now, from Dinosaur Pile-Up’s latest album Celebrity Mansions. “Round The Bend is about being at the very edge of your emotional strength,” says frontman Matt Bigland. “I wrote it when I was at a breaking point of sorts, where I felt like what I'd been trying to make happen with the band for 12 years wasn't in fact going to happen.”

Accompanied by a video shot at the (perhaps aptly named) Sad Hill Cemetery in Spain, this is one of the softest moments on Jack’s album Who Feeds The Wolf?, but that doesn’t mean it’s not one of the best. Written about his father’s alzheimer's diagnosis, it’s a tender, acoustically rooted moment from a guy perhaps better known for shitkicking Crowes-meets-Wylde oomph.

Like your rock’n’roll to sound like it’s been pulled from a graveyard? Sometime in the late 60s? Preferably dressed up in skull rings, crosses and black flares? These guys are totally your bag, mixing Black Sabbath and Blue Oyster Cult tendencies in a manner of which... well, Lucifer would be proud. Check out more on Lucifer III, on sale March 20.

Sunkissed, upbeat soul-searching tuneage now, peppered with a few Iggy-esque vocal lilts and dashes of warm soul – lyrically “centred around being on the wrong side of the law and the song reflects on the irony of consequences catching up at the most inopportune moment.”

Dramalove - Written In The Stars

This ambitious Brighton-based trio look like something out of a Tim Burton-come-My Chemical Romance cheese dream, but here sound more like Muse with touches of Royal Blood and an extra boxful of synths. The chorus is the size of a bus; the sound of a band dreaming big. Watch this space.