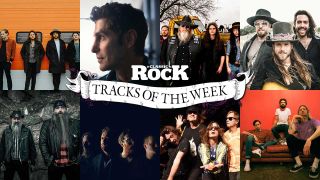 Hard rock, pop rock, Southern rock, alt rock, 90s throwback rock, vintage rock... We've scoured enough new heavy sounds to make your ears bleed for days, combing through it all until we were left with only the shiniest and bestest. We reckon you'll enjoy this era-spanning selection, but first let's look at last week's top three. In reverse order they are:

Congratulations to The Underground Thieves! And bravo to Morganway and Piston on healthily-scored second and third places. You've all done very well.

Now it's over to YOU, our trusty rock judges and connoisseurs, to decide this week's winner. Once you've given the snazzy, blues rocky number from last week's champions a spin. Bon appétit...

With fashionably booted feet in the classic and indie/pop rock camps, Novatines are bright-eyed new faces in the latest millennial wave of Brit rock – in which tunes, thankfully, are just as important as style. We would say that the opening verse of Medicine, while perfectly cool and tasteful, might not knock you backwards right away, but stick around for the chorus (and you don’t have to wait long) as that’s when things get really good – in a singalong-friendly, ‘we could totally do legit-massive stages, like, now…’ sort of way.

The idiosyncratic, perennially youthful voice behind Jane’s Addiction has a new solo album, Kind Heaven, coming out this week (his first in over a decade). This superbly titled first hit is a dark, come-hither cocktail of industrial synths, juddering electronics and smashing rock guitars – with Farrell himself revelling in his own inimitable form that’s simultaneously sensual and Peter Pan-like. Check out more on June 7, when the full thing goes on sale.

There’s more to this lot than meets the eye, but what does meet the eye isn’t exactly misleading either (think badass heavy Southern-baked noises with an eye on the dark side... imagine a gonzoid, latter-day Zakk Wylde and you’re on the right track). If you ever dreamed of spending time in a part-dive part-shed in some Deep South backwater spot, with a burly Texan biker dude bellowing in your face – flanked by his stoner buddies armed with vats of moonshine and loud guitars – now’s your chance.

Lukas Nelson And The Promise Of The Real – Bad Case

It’ll be some time before country lifers stop shouting for Willie (and Waylon, Hank, Merle etc) in bars across the American South, but when they do they’d do well to request something by his son. Lukas Nelson continues to prove his own considerable worth in this beguiling mesh of countrified tones, swoon-inducing slide guitar and Tom Petty-esque heartland rock.

Seldom has anyone shouted ‘I’m riding my horse again!’ and sounded this livid. Transport League sound really fucking angry about something (the ‘1200 goddammed’, one assumes), and (happily for us...) the only way they can convey this is through hooky, fuzzy riffs the size of elephants. The finished product? The sound of a shouty, punky Clutch riding Harleys through a desert designed by the Mad Max production crew.

Atmospheric but punchy modern rock from Northampton now, with enough ‘techy’ guitar to impress six-string nerds without boring everyone else. The band describe this beefy yet dark, thoughtful number as: “A song written as a retaliation to the crazy world we are currently living in. Where ideologies force humans to perform inhuman acts against each other in the name of religious theocracy or political authority.”

Redd Kross - Beyond The Door

Remember Redd Kross? The Californian 80s/90s kids with fizzing pop rock joie de vivre of Ash and the alternative sensibilities of Nirvana (if both those bands had spent more time listening to the Beatles)? They were brilliant, but never really enjoyed the success they probably deserved. Now a little longer in the tooth but no worse for it, they’re back with a new album later this year. Based on this short but sweet first taste we’re expecting loveable things...

Dinosaur Pile-Up - Round The Bend

The latest slice of the British alt-rockers’ first major label pie; the apex of a career that’s seen them occupy the fuzzy area just below broadsheet-courting mainstream rock. We’re not sure if Round The Bend is more nostalgic for the early 00s (somewhere between the indie guitar and pop-punk waves) or the grunge and punk rock of the 90s, but either way we’re very taken with it.