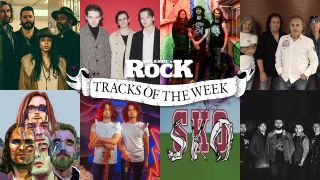 Another Monday (it is Monday isn’t it? And what month is it again??), another fruitful week for rock’n’roll, and another scorching list of new tracks to sink your teeth into. Gigs might not be happening, but new music sure as hell is.

Last week Marisa & The Moths soared to victory with Skin (Stripped), followed by Joe Bonamassa in second place and Black Star Riders in third. Well done to all three of them! Have a spin of Marisa & The Moths’ winning track, then check out this week’s list and vote for your favourite using the poll at the foot of this page.

This short, sharp but super-sweet shock is half of these Brooklyners’ new EP Victory (out June 20). Clocking in at barely over two minutes, Rock Bottom is a honeyed vignette of despair and disenchantment, wrapped up in soul and 70s rock’n’roll (‘I left my pride back at the job/I dropped my dignity somewhere on this walk’ sings vocalist Alysia Quinones). Guitarist Tommy tells us: “these songs, content-wise, reflect the times we are currently living in and what we all want to achieve in the end. That was our goal when we made [the EP], even though that was before the virus happened and all the riots.”

Weapons-grade dark matter from Manchester-based (and Doncaster-born) trio The Blinders. Building on the momentum of firebrand debut Columbia, this latest taste of their second album is an Iggy-come-Joy Division-esque mesh of driving guitars, commanding haze and eloquent fury – all of which escalates into a fuzzy crescendo that'll make you want to howl at the ceiling, or smash the nearest bit of crockery in your vicinity...or something.

All Them Witches - Saturnine & Iron Jaw

Well whaddya know? It’s them witches; all of them! (sorry sorry, open goal, piss-easy shot etc…) And they come bearing a new song from their upcoming Abbey Road-recorded album. The psychedelic smoke and pizzazz of 2017’s Sleeping Through The War is there, but this time it’s stretched and embellished with moody, post-rocky chords and gear shifts that keep it on the sweet side of stoner. Swarthy, hazy, heavy... They’re back.

Pre-order new album Nothing as the Ideal

This boot-stomping boogie from original drummer Coghlan and his merry men is huge fun. The accompanying homespun footage of the band in their respective lockdown states (rocking out at home, dressing up as cowboys, producing shoes from the fridge…) compliments it all nicely. ‘I lost my mind in lockdown,’ they sing, ‘and I can’t wait to be with you again.’ Well, quite.

KOYO - Out Of Control

Whip-smart progressive/alt rockers KOYO (or rather, ‘KOYO Space Labs Inc’) are releasing their second album You Said It later this month, from which this seductive mesh of melodic shoegaze, grunge and alternative tones is taken. Expect soaring chorus action, and pleasingly bizarre, old-school footage of a spaceship hovering over what looks like some sort of industrial estate (gives some credence to the lyric ‘tripping on thin air’).

Pre-order You Said It

The Moon City Masters - Over Now

Another delicious treat from Brooklyn now, this time from the Steinberg twins – aka The Moon City Masters. Over Now has everything we’d want in a feelgood piece of funky rock n’ soul; heart, harmonies and a whole load of California circa ‘73 sunshine. Upon its release on Friday the band said, “groove warning: this song will make your body move.” They were not wrong.

A debut single next, from some Norwegian revivalists with an ear for knowing lyrics and, by the sound of it, a steady diet of 70s rock'n'roll. Schumann Kjørlaug Overdrive (aka S-K-O) was “born out of appreciation for 70s rock in the style of Zeppelin, Stones, Faces and similar bands of that era.” If that all sounds like good clean fun, you won’t be disappointed by this. And we can pretty much guarantee you’ll be humming the chorus – ‘Building a Zeppelin/in my garage!’ – under your breath for the rest of the week.

Dead Reynolds - By Your Side

East Anglian alt rockers Dead Reynolds are the brains behind this fizzing, energetic burst of angsty power pop/rock now. Nodding to the likes of Foo Fighters and latter-day Deaf Havana, its lyrics conjure scenes of heartache (e.g ‘When the lights go down on us/shed a tear for secrets that just turn to dust’) but musically it’s all caffeine-pumped, get-up-and-go stuff.