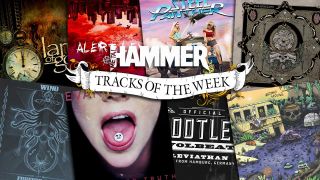 The world might be in a crazy headspace right now, but metal carries on undaunted. Which is why we’ve decided to fire up our new Tracks Of The Week round-up.

It’s so simple even Donald Trump could grasp it. We bring together the best new metal songs from the last seven days, run through them and get you to vote for your favourite when you’ve annoyed the neighbours with ’em all.

This week we’ve got much-anticipated comeback singles from big guns Lamb Of God, Evanescence and Ministry, a hip hop/pirate metal mash-up from grog-guzzling pranksters Alestorm, a must-see video from cock rock kingpins Steel Panther, plus some goth. Lots of goth.

So get stuck into this week’s choice selection of noise, and vote for your favourite at the bottom of the page – we’ll reveal the winner next week.

Randy Blythe and co might have put their self-titled new album back to the end of June because of you-know-what, but they’ve been kind enough to unleash this monster of a tune on the world to tide us over. It’s a proper banger, complete with ferocious roar from Randy and OTT drum assault from new boy Art Cruz.

It’s a crazy world out there, and Ministry have just made it a little crazier. Where most people would see the current situation as a bit of a bummer, Uncle Al has used it to surface from quarantine and drop this grinding new effort from the industrial-metal icons’ upcoming album. ‘Let’s get ready to die!’snarls Al over a grinding riff, while a sampled female voice repeatedly asks, ‘How concerned are you?’ Pretty fucking concerned Al, since you ask.

Evanescence – Wasted On You

There’s very little Al Jourgenson and Amy Lee have in common, but refusing to let the current state of the world get them down is one. Evanescence have returned to the fray with this goth-metal power-ballad, taken from what will be their first studio album in nine years. It’s epic! It’s dramatic! It’s got lyrics about trashing hotel rooms and murdering kittens! Only kidding, it’s loneliness and isolation. Timely, huh?

Did we miss the memo about it being International Goth Week? The British metal veterans’ forthcoming album Obsidian finds them seriously channelling their inner Sisters Of Mercy, and the latest teaser sounds like PL’s 1995 masterpiece Draconian Times doused in patchouli oil, force fed cider and black and shoved in front of a smoke machine. This is a compliment, by the way.

Mushroomhead – Seen It All

Just because Mushroomhead were more famous for moaning that a certain band from Des Moines ripped off their whole mask shtick than their music doesn’t mean they were bad. The first track to be released from their eighth album A Wonderful Life – due to land in June – is an impressive slab of modern metal that deserves more than the inevitable Slipknot comparisons. Like this one.

Alestorm hit on a very funny idea years ago AND THEY ARE NEVER LETTING IT GO! In fairness, this salvo from soon-to-arrive sixth album Curse Of The Crystal Coconut mixes it up a bit, bridging the gap between pirate metal and (ulp!) hip hop, chucking in a cameo from masked rapper Captain Yarrface along the way. Whether you think that’s a good thing or a bad thing depends on how many rums you’ve knocked back.

Chicago noise-thrashers Oozing Wound have come up with a) the best song title and b) the best video of the week – a funny but disturbing lo-fi clip that manages to comment on the anxieties of the modern world while being absolutely fucking batshit crazy. It would probably be NSFW if anyone was actually at work.

What?! More goth and more isolation-themed misery? We'll let this one slide, because it's from former Obsessed frontman/unofficial Doom Metal Hall Of Fame founder member Scott ‘Wino’ Weinrich, who has teed up his very first solo album, Forever Gone, with a cover of Manc miserablists Joy Division’s 1980 proto-self quarantining classic Isolation. But Wino has taken the original’s bleak spirit and funnelled it into a heavied up semi-acoustic doom-blues number. And that is why he is a genius and everyone else is not.

It’s Michael ‘Junior Elvis’ Poulsen riding to the rescue, as Volbeat do their damndest to lift out spirits with this chest-beating version of the track from last year’s Rewind. Replay. Rebound album recorded live in Hamburg as of their sporadic Official Bootleg series. We'll have some more of this if that's OK with you, Mikey-boy.

Yeah, the Heavy Metal Rules album’s been out a while, but we’ve shoved this in the list purely because of the video, which finds our heroes dressed as a 1980s boy band, a mariachi troupe, banjo-twanging cowboys, an 18th century chamber quartet and – Satan be praised! – a bunch of fully corpse-painted black metallers. That last one is worth the price of entry alone.