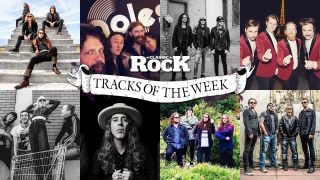 We’ve combed our way through the great and good of new rock’n’roll to present you with these golden nuggets. And we must admit, there’s a lot of quality stuff out there right now so it’s a strong haul this week – hot on the heels of last week’s shining selection, which saw you guys vote the following bands into your top three:

2. The Struts - In Love With A Camera

Huge congratulations to Lovesick Radio, followed by The Struts and Whitesnake in hard-earned second and third places. Have a spin of the more-ish winning track from that edition, then get a load of this week’s tunes and vote for your favourite in our easy-to-use poll at the foot of this page. Enjoy...

Roadrunner’s hot new signees are making good on their early promise with this taste of their EP, Place In Time, which is out this Friday. It’s big, brooding but bold rock’n’roll, in the sumptuous, hard-hitting vein of Myles Kennedy, Slash, Rival Sons and Soundgarden all swirled together into one delicious milkshake. Big stages beckon...

Catchy, heart-warming pop rock with fire in its belly (it is called ‘Dragons’ after all…), courtesy of British tunesmiths Ulysses. Armed with a gloriously silly video it all feels a bit like Monty Python’s Holy Grail crossed with Life On Other Planets-era Supergrass – though thankfully the song itself draws more from the latter. Super sweet and perfectly formed, without being cloying. There’s a new album due in June too, so keep your ears open...

The Cadillac Three - Crackin’ Cold Ones With The Boys

The message of the Tennessee trio’s new single is neither complex nor profound. Cold beer is good. Drinking it with your buddies is better. That’s about the sum of it. But it actually works beautifully, kicking off with a rocky, chugging beast of a riff before sliding into a chorus that’s pure 21st century Nashville. We can’t stop playing it.

Sparkly, fizzy yet thumping disco rock now, from the funkiest men in Sweden. Like its namesake the hook and accompanying video go round and round and round, without losing their shine. If you enjoy this, and liked their previous hits (Tommy Gun, When I See You Dance With Another etc etc…) chances are you’ll love new album Club Majesty, which goes on sale May 31.

Oooh we do like to spoil you here at TOTW… If those first four tunes haven’t left you pumped, this new lil’ pop rock firecracker from Ryan Hamilton should do the trick. Paired with a video comprising footage from fans, it’s a joyful feast of buzzy, harmonised good vibes, punky jabs and dulcet odes to a lovable fuck-up.

Amyl And The Sniffers - Got You

Young Aussie punks Amyl And The Sniffers are on fast, fierce form on this, the latest single from their self-titled debut, which comes out in May. Old-school punk sensibilities and millennial aggro make effective bedfellows, propelled by compelling singer Amy Taylor.

Trying saying the band name out loud in your place of work. We alerted our comrades here to these guys, and it elicited a decidedly animated response; from speculations re the kind of music they might make, to hankerings for actual crumpets. Drawing from the same Aussie psych well as Tame Impala, POND and King Gizzard, Bill’s Mandolin is a blissed out mesh of prog, indie pop and fuzzy rock.