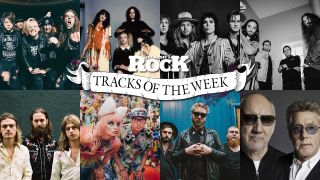 Another week, another splendiferous catch from rock's fruitful seas – proof, if it was needed, that the musical sphere we all love so dearly continues to deliver the goods. First of all, however, the important business of last week's top three:

3. Wille & The Bandits - Victim Of The Night

Congratulations to Dirty Honey, who won us (and, most importantly, you guys) over with their righteous, hip-swaying single Rolling 7s. Thumbs-up also to Tremendous and Wille & The Bandits on well-earned second and third places. Now, prepare to sink your teeth into this week's selection, then vote for your favourite at the foot of this page. But first, a spin of last week's champions. Enjoy...

If you’re not quite firing on all cylinders as the new week gets underway, play this. Don’t think. Don’t ask questions. Just listen and see how you feel after. For anyone not already inducted into these Swedes’ world, just imagine the most joyous side of over-preened 80s rock (the gleaming synths, the killer melodies, the chest-pumping guitars) as seen through passionate, not to mention talented, millennial eyes. A new album is due in 2020, so watch this space...

The noisy, anarchic end of The White Stripes meets [British alt bluesers] Kill It Kid in this latest one from Saint Agnes. Simple yet highly effective – hooked on a proper lodge-into-yer-brain refrain – it’s an enticing mix of thumpy garage, gothic decadence and proto-punk fuzziness. Get on it...

The Struts - I Do It So Well

Ahead of their UK tour this month, The Struts have released this video for (arguably) the sassiest thing on their latest album, Young And Dangerous. The musical equivalent of a glittered-up primadonna telling you to ‘talk to the hand’ (in a nice way...), and the most fabulous thing we can remember seeing shot in a backyard, from one of Britain’s best live bands right now – perhaps the best.

Uforia - Say What You Want

Textured yet punchy hard rock from Toronto now. If you like the unpigeonholable yet hooky alt-rock of Puppy (and are also partial to a bit of Foo Fighters and classic grunge), these Canadian dudes are well worth your attention.

Dutch kids DeWolff literally wrote and recorded their new album while on the road. Which meant that it all had to come from totally portable gear, so out went their trademark hammond organ and vintage amplifiers, in place of an altogether more lo-fi operation. It leaves them nowhere to hide on the songwriting front, and thankfully this taster suggests it’s worked - all sweet, old-school soul harmonies, funky bass lines and (in the video) spirited crossdressing.

Documenting singer Dolly Daggerz turbulent relationship with alcohol, the Brit rockers’ new single combines the raw rock’n’roll of Deap Vally with the emotional pull of No Doubt. "I wanted to describe how I'd become dependent on alcohol to feel ok,” Daggerz says of the song. “I got so used to drinking whiskey straight out of the bottle before jumping on stage. I thought being wasted was the only way I could perform as a riotous female."

Wolf Jaw - Piece Of Me

The UK band previously known as Badflowers rebranded themselves as Wolf Jaw, and it’s serving them well – if this commanding, pleasingly angered piece of 90s-nodding rock is anything to go by. Heavy music with fire in it's belly, just how we like it.

The Who - All This Music Must Fade

One of our favourite tracks from the new Who album has been released as a single, so we're delighted to conclude this week's TOTW with it. A classy, literate yet ballsy tune that sounds familiar without feeling tired or predictable (right down to the nicely barbed closing lyric). Pete n' Rog at their best; John and Keith would have been proud.