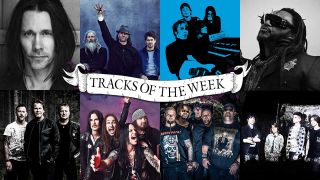 Welcome all to this week's round of the best new rock'n'roll to grace the planet. Or eight examples of it anyway... Either way, we've enjoyed putting this list together and hope you like what you hear. Last week you voted these guys into the top three:

1. Amorettes – Everything I Learned I Learned From Rock’n’Roll

Who'll sway your vote this week? Check out the selection below, from a range of old favourites and newer faces. But first, how about a spin of last week's winners Amorettes? Yeeeeah let's do that...

Myles Kennedy – Love Can Only Heal

This week the Alter Bridge has been busy taking his solo debut (plus a whole load of other tunes from across his career) out on tour across the country, armed only with acoustic guitars and his perennially fabulous voice. This live cut from Manchester, preceded by a minute’s explanatory chat from Myles, shows one of the most tender moments on Year Of The Tiger – mixing Zeppelin-y folkiness with a rousing ‘la la la la la’ chorus. Lush.

The West Country Place Your Hands-famed rockers are the guys behind this acoustic-strumming, sweetly Southern-edged duet with Sheryl Crow. Taken from forthcoming album Revelation, which is on sale 4 May. Easy, breezy, groovy… Here be good times. Get involved.

One of our favourites from the Canadian indie rock kings’ new album, Sloan 12. It’s a pensive contrast to the more chipper, power-pop end of their spectrum, but rather sublime for it. Lush Laurel Canyon-nodding harmonies mix with alt introspection, making it beautifully sunshiney and brooding.

And now for a totally different brand of brooding rock, with way more distortion and heavy, riffy swagger – from South Wales’s most badass export. Good to know we can always rely on Benji and co for a rousing shot-in-the-arm of topically-charged aggression, with a sweet side. Nice.

Enjoy a bit of Europe, Whitesnake, Foreigner and the like? Chances are you’ll like this slice of these AOR fellas’ new album All Rise. Stemming from a robustly satisfying guitar groove and big glossy vocals, it’s a well-executed dose of nostalgic but fired up beef.

Synths, diabolic screams and mouthwatering guitar chops sit (or rather, rock the hell out) side by side in this new one from the Swedish hard rock cohort – complete with flashy soloing and merrily glittered-up 80s-nodding chorus.

Statement – Darkness In Your Eyes

A chugging dose of metallic hard rock oomph now, courtesy of Danish band Statement. Verses and guitar solos are moody but meaty, machine-gun affairs, offset by a sprightly, singalong-ready chorus (the “darkness in your eyes” idea suddenly seems a lot less ominous at this juncture…).

Brazilian rockers Poison Gas are young. Really young in fact – they were all born in the ‘00s. But based on this tight, slickly produced display of fuzzily concentrated riffs, power punk-meets-classic rock drive and Chili Peppers-tinged chorus, that’s doing them no harm.