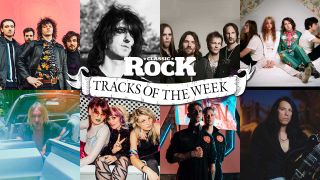 Hello folks, and welcome to another edition of Classic Rock's Tracks Of The Week, in which we comb through the latest rock tunes - from newbies and big fish alike - and cherry-pick eight of the best. But which is the best? As ever it's up to you to decide. Thanks to everyone who voted in last week's poll (there were a lot of you...), below are the bands and songs that made it into your top three:

Congratulations to Wayward Sons! And very well-played Elles Bailey and Crobot, who achieved healthy portions of the vote in second and third places. Now, who deserves to win this week? Check out the delicious selections below and vote for your favourite in our easy-to-use poll at the foot of this page. But first, let's have a spin of last week's winners Wayward Sons. Bon appetit...

We’re kicking off this week with the velvet-voiced new single (and the title track of their new album) from Liverpudlian youths Little Triggers. Chock-full of stylish soul swagger and jutting guitars, like The Doors chilling with Great Western Valkyrie-era Rival Sons, it’s enough to make you feel pretty happy about the next generation of rock torch-bearers.

Ahead of their Kiss Cruise slot, German rockers The New Roses have dropped this big, sunshiney new tune. All motorbikes, corn fields and Flying V action teamed with lovable 80s heartland sway (part rootsy rock, part radio-friendly fodder), it’s practically telling you to down your tools, grab a cold beer and hang out somewhere in the American south.

LA’s blood-spattered Ozzy-flavoured anarchists are back, and this time it’s...well, kinda grungy actually, and matured on the songwriting front (without being ‘mature’ in the beige, chin-strokey sense of the word). Complete with brilliantly batshit video - involving tea, china cats, Battenberg cake and De Wilde with her face in a plastic bag, among other shenanigans - it’s a promising omen for their upcoming new album.

Some iconic rock singers do not improve with age (understandably, mind; the voice is the most vulnerable thing for these guys, and therefore, more often than not, the first thing to go). Iggy Pop is not one of them. If anything it’s almost as if his voice has improved on this new single - built up from a minimal but cool bassline and refrain of “she wants to be your James Bond”. The first taste of his first record since 2016’s Post-Pop Depression, it’s a good way to start...

Ever been speed-dating? This video might jolt some memories if so. A noisy, fizzy cocktail of grungy pop, QOTSA oomph and jagged alt flavours, you can see how Jayne Doe may’ve been more compelling for the protagonist than the squares she finds herself facing. She meets her match in the end though...

Anyone missing Keith Flint could do a lot worse than looking toward these enigmatic mixers of dark, edgy electronics, cheerfully individualist politics, strobe-ready synths and pounding guitars. Even if warehouse raves aren’t your thing, you’ll probably want to go one after hearing this.

Celtic-infused rock for sloshing pints and dancing until the small hours, from the Tyketto frontman. Not that its a mindless jig, far from it; Danny mixes his Irish roots with a knack for Americana storytelling. The best bit is the bridge, the shift and vocal harmonies offering an unexpected, stirring break from the key refrain.