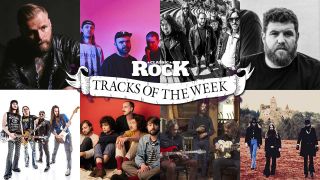 Hello people of rock, and welcome to a brand new edition of Classic Rock’s Tracks Of The Week – where the sun always shines, the coffee’s always hot and the tunes never fail to impress. Flippin’ loads of you got involved in last week’s poll, and below are the bands you voted into your top three:

Congratulations Jacob Reese Thornton and friends! And a big well done to The Cold Stares and Phil Campbell, who achieved healthy scores to finish in second and third places. Now, get stuck into this week’s list and vote for your favourite, right after a lil’ spin of last week’s champions. Enjoy...

Kris Barras Band - What You Get

For our money Kris Barras’s new album, Light It Up, marks a turning point for him. Having slipped into the ‘blues guitar dude’ bracket for his last couple of records (despite never really being a purist blueser), on this record Barras is all about the rock with a capital ‘R’ – opened in emphatic, look-at-me style by What You Get. A touch of slide, a bit of moody introversion, a lot of straight-up oomph… we like.

This hooky, grungy latest cut from Puppy’s excellent debut The Goat comes with “a kind of nonsensical You Tube tutorial-cum-pound land Ted Talk”, according to drummer/video director Billy Price. Basically it’s a frenetic but oddly meditative reflection of today’s wave of online content that presents complex problems as simple (e.g. taking apart amps, curing insomnia etc). You might still find these things difficult, but as Price suggests “it can be kind of satisfying watching someone else fix these deeply intricate things with a Zen-like ease.”

One of our favourite tracks from Opeth’s new album, In Cauda Venenum, Svekets Prins (that’s ‘Dignity’ in English) is a theatrical, layered blast of luxury progressive rock – not so much flirting with the 70s as embarking on a steamy, passionate affair with it. Still, while the Swedes clearly don’t give a toss about being ‘cool’, they’ve approached this with the kind of energy, prowess and optimism that makes it sound fresh, not tired.

Lionize - Heavy On My Mind

A slow, brooding turn now from the Marylanders long famed for funky shit and reggae rock. Does it work for them? Oh yes. We’ll always love their upbeat, groovy side, but the combination of pensive minor chords, heartfelt lyrics and emotionally raw soul (one of singer Nate Bergman’s vocal highlights to date) makes for seriously stirring stuff. In need of a little catharsis? Listen in.

Enjoy the sweaty, good natured American testosterone of Buckcherry, We Are Harlot and the like? You’ll get on just fine with these guys. Rock-N-Roll doesn’t reinvent the wheel, but it gives it a tasty lick of slide guitar polish and vocals so heavily laced with booze and fags you can only assume it was forged in the diviest of dive bars. There’s a couple of minutes of staged ‘bantz’ at the end, which feels slightly unnecessary but doesn’t detract from your enjoyment of the song itself.

Expect blissed out dream pop, fuzzy alt rock and dog worship (yes, dog worship...) in this new one from Bristolian noiseniks Some Bodies. A cool yet inviting cocktail that errs on the hookier side of indie, much gold confetti included.

The Magpie Salute - In Here

Rich Robinson and friends are back with the follow-up to last year’s sublime High Water I. That album set the bar very high, and this sweet, nicely heartland-y early taste suggests it wasn’t just a random flash in the pan. Propelled to weapons’ grade heights of soulful rock’n’roll by singer John Hogg and Robinson’s own ear for rootsy, melodious yet world-worn tuneage, it’s whetted our appetite for the full LP.

Strange, ominous things be happening in the Kadavar camp, set to a delectably dark yet propulsive soundtrack of classic rock, proggy leanings and dashes of doom. If the revitalised nostalgia of Uncle Acid & The Deadbeats and the like gets you going, you'll adore this. Cool video, too...