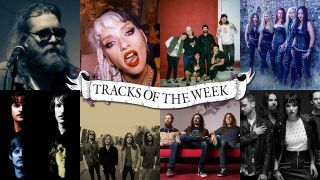 Start every week as you mean to go on, that's what they say. In our case that means cramming as much fresh audio into our ears as we possibly can, and then presenting it to you in easily digestible form. This week's triumphant shortlist is below, and there's a voting widget at the foot of the page, where you can tell us your favourite.

Meanwhile, though, there's the matter of last week's winner. And here's the final trio, in order of growing popularity.

2. Samarkind - Thru That Door

So congratulations to GVF, who seem to by winning over hearts and minds as well as weekly song competitions. And here's another chance to hear their victorious, if somewhat reflective tune.

If that title and band name sound rather chipper, it’s with good reason. We didn’t realise Auckland boogie was a thing until these guys came into our lives, but we’ve decided we’re fans - if this joyful lil’ piece of lo-fi but bouncy, highly danceable piece of rock’n’roll is anything to go by.

A distorted, hooky shot of ballsy, punk spirited oomph now from Lauren Tate’s South Yorkshire rockers, with a gloriously debauched video full of dollar bills, Champagne, hot tubs, rose petals, pots of what look like Skittles… you get the picture. Check it out, it’s a good ‘un.

Culture Abuse - Police On My Back

In which San Fransisco funsters Culture Abuse release a lively cover version of The Clash's 1980 version of Police On My Back, which was actually a cover of The Equals' 1967 original, and somehow end up sounding like Cheap Trick playing punk along the way. Perhaps it's the "nee-naw, nee-naw" guitars. Either way, it's more brass in pocket for the song's writer, Eddie "Electric Avenue" Grant, and that's gotta be a good thing.

Little tip: never call yourselves Burning Witches unless you’re really fucking hard-ass and can deliver the promise of such a brilliantly over-the-top premise with aplomb. So it’s a good thing that that’s exactly what these Swiss metalheads do. They’ve clearly swallowed every last drop of NWOBHM going, plus several gallons of Doro, and it works well for them in this new track; which snarls, cackles and shreds with theatrical glee.

The Genuine Fakes - Even With You

Time now for some kooky, jerky but lovably catchy indie rock from Sweden, mixing electronic touches, fuzzy guitar and sunshiney harmonies into one sweetly lovesick (but not sugary) package - with a pleasingly bittersweet bridge section. Nice.

Not having much fun in 2018? Why not make like it’s 1970 instead with this highly palatable Mountain cover from Southern Californian rockers Joyous Wolf. Oh-so groovy and swaggery, you need it. And do check out original song/other half of their new double single Slow Hand; it’s similarly nostalgic and right tasty.

All deep, dirty grooviness, thunderous bass lines and soul-dude vocals, all the way from Memphis, Tennessee, this is one of the most more-ish things we’ve heard from the Dirty Streets. Like what you hear? Check out more on latest album Distractions, which is out now.

Halestorm - Do Not Disturb

Do Not Disturb marks the precise point where on-the-road encounters of a sexual nature collide head-on with horror movies, as Lzzy Hale comes on as lascivious version of Cruella Deville, uttering come-to-bed lines into antique phone while wearing a wig that looks like Amy Winehouse checking in for Halloween.  All that, and chorus bigger than a tractor. Hot stuff.