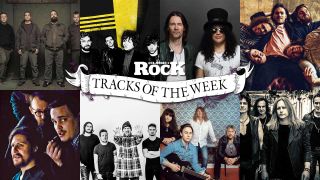 Hi folks, hope you all had excellent weekends and welcome to the latest edition of Classic Rock's Tracks Of The Week. Eight slices of the hottest new rock'n'roll await your delectation and judgement. We've got punchy young bands, treasured veterans and others in between, but first let's see who made it into your top three last week:

Congratulations to Collateral! And to second and third prize winners Buckcherry and Matt Mitchell, who also earned impressive scores. So, who's it gonna be this week? We'd love to know what you make of this lot, and who you rate the highest, so tune in, check 'em out and vote for your favourite at the foot of this page. But before that, how about a spin of last week's first place winners Collateral. Enjoy...

If you think this latest video from Fallon and friends (the roaring, blues-chugging romp of a song is from 2018’s Book Of Bad Decisions) will offer some sort of, like, metaphorical interpretation of a ‘ghoul wrangler’ – or a maybe a sober reflection on the woes of contemporary society – you are wrong. OK, technically three of the guys are dressed up as lawyers, but from there it all gets way more batshit with a gloriously literal interpretation of Fallon’s tale of bloodthirsty litigators on some backwater smallholding. Altogether now: 'Folk magic! Hot off the grill!'

Right, seekers of young rock hopefuls, get a load of this: a proper little firecracker from Liverpool rock’n’rollers Little Triggers. Landing in a very sparkly place somewhere between JET, the Rival Sons and The Struts (the singer sounds like the swaggering little brother of Jay Buchanan), it’s just the kind of charismatic joie de vivre we hope to hear from new rock blood – in three and a half punchy minutes.

Slash ft Myles Kennedy & The Conspirators – The Call Of The Wild

How about some Slash, doing his Slashy thing, with Myles and co, in front of a whacking great crowd in Poland? The whole of their latest album, Living The Dream, is such a consistently strong affair (for singalongs and air-guitar action) it’d be very hard to go wrong here. The musical equivalent of a chocolate Hobnob dunked in a particularly good cup of coffee. You want it, we want it, let’s ‘ave it...

Leeds based progressive bright sparks KOYO are back with a gnarly, upbeat new single. If Radiohead were more given to music you can dance to – having flirted with the Foo Fighters, and hung out with the Kscope school of ‘nu-prog’ – it would’ve sounded like this. Thematically it’s your basic self-discovery narrative about “getting back to the person you really are inside”, but it’s their mix of tastes (spanning prog, grunge, metal and more) that reflects most flatteringly in their songs.

The Yawpers – Child Of Mercy

If you like new, left-field takes on Southern music, you should really check out Denver trio The Yawpers – whose blends of old-school roots and alternative rock drive we’ve been enjoying for a few years now. Where previous album Boy In A Well was an intricate, carefully planned conceptual affair, new LP Human Question was written, rehearsed and recorded in two months. Not a bad call at all, on the strength of this catchy, percussive mix of blue-collar oomph, fuzzy distortion and introspective verses.

Channeling a not dissimilar spirit to the new wave of politically charged rock bands like IDLES and Blinders – but with more a chunky, riffy sensibility here – are Eastbourne noiseniks Saint Apache. Chaotic and rough n’ ready but more impactful for it, Amongst Vultures hits the kind of raw but catchy nerve that we could see appealing to multiple generations of punk and rock acolytes.

Last In Line - Blackout The Sun

We’re leaving you today with the new single from Viv Campbell-led, ex-Dio dudes Last In Line – a weighty, swaggering downbeat number from upcoming album II. On the one hand, if we're honest, it's not the best thing we've heard from them. On the other hand it's a meatily satisfying hunk of six-string beef and lion-roar vocals that's pepped our appetite for the album to come.