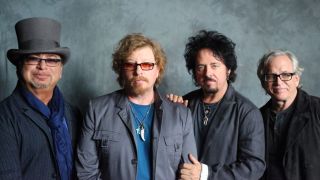 When they emerged from Los Angeles in 1978, Toto were roundly derided by the critics for being over-privileged muso brats. That didn’t stop them notching up a string of hits that turned them into one of the definitive bands of the late 70s and early 80s. These are the essential songs that made them famous – and a few that only the connoisseurs will know about.

Toto’s first single, a huge hit, is one of the definitive, all-time great AOR songs, its swinging groove based on Sly & The Family Stone’s Hot Fun In The Summertime.

A deep cut from the band’s debut album, Girl Goodbye is a blistering, kick-ass funk-rock track, elevated by dazzling musicianship and a killer lead vocal from Bobby Kimball.

Second album Hydra, released in 1979, is revered by Toto connoisseurs for its epic prog-rock title track, but on Mama, these white boys showed they had soul: Kimball, especially, digging deep.

Gift With A Golden Gun

In 1981, the Turn Back album stiffed, and Toto feared being dropped by Columbia Records. But this song really should have been a hit. Crunchy riff, great chorus: a lost classic.

David Paich calls it “a unique song”: his hymn to ‘the dark continent’, a soft-rock masterpiece underscored with world music rhythms. In 1983, Africa hit US number one, UK No.3.

Written by Paich, sung by Kimball and Lukather, and named after Steve Porcaro’s girlfriend, Rosanna is the perfect AOR/R&B hybrid. Deep ‘in the pocket’: the first hit from Toto IV.

Singer Fergie Frederiksen, who died in 2014, recorded just one album with Toto, 1984’s Isolation. The title track had an urgent intensity – and Fergie sang the shit out of it.

I’ll Be Over You

From 1986’s Fahrenheit album, I’ll Be Over You is the best of many ballads written and sung by Lukather. Includes a brilliant cameo from beardy Doobie Brothers legend Michael McDonald.

A buried treasure – recorded in 1989 but only released in 1998 on the odds-and-sods anthology _Toto XX _– Goin’ Home is better than most band’s greatest hits. Pure, high-class AOR.

On the new album, Toto XIV, it’s this song that proves beyond all doubt that these guys can still cut it. Brilliantly sung by Joseph Williams, Orphan is Toto’s modern classic.

The Secret History Of Toto