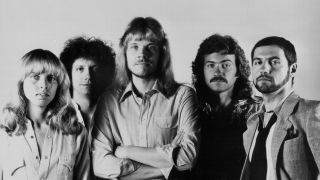 Styx in the 70s: these are their Top 10 songs (Image credit: Michael Ochs Archives\/Getty Images)

Arguably the ultimate pomp rock band, Styx practically invented the genre in the mid 70s. The Chicago band mixed sophisticated musicianship, straightforward melodies and a flair for showmanship, while the core – original vocalist/keyboard player Dennis DeYoung, plus guitarists Tommy Shaw and James Young – ensured the approach remained intact while also constantly being refined, throughout the glory days in the 70s and 80s. These are their finest moments.

From 1983’s Kilroy Was Here, this is perhaps the only track on the album that harks back to late 70s Styx style. It has flamboyance, edge and a real sense of dark humour, as lyrically Denis DeYoung preaches on the evils of rock’n’roll. Then production, though, has enough state-of-the-art perspective to make this sound contemporary.

The band’s first hit single in the States, although this proved to be a one-off success at the time. An early example of their ability to parade progressive inflections with multi-harmony vocals, throbbing melodies and brusque guitar. In other words, this really was close to being the birth of pomp as we came to know and love it.

An acoustic song which features Shaw on lead vocals. Moreover, he also plays the mandolin, while DeYoung is on the accordion. All of this gives the gentility of the track a somewhat expressive European flavour, which makes it more than just another power ballad. This underlines Styx’s capacity for thinking beyond the norm.

Probably most closely associated these days with the TV show South Park thanks to the cartoon cast’s memorable interpretation, the original is one of the all time great power ballads, as a poignant piano and vocal from DeYoung nestles up against a formidable guitar plunge. Taken from the epic The Grand Illusion, the album hat gave the band mainstream acceptance.

One of the crucial songs on the conceptual Paradise Theatre album. A synth part, complements some fine guitar work from Shaw, who also provides the lead vocals. There’s a new wave aptitude that provides a satisfying bridge between what Styx had done in the 70s and what was happening at the start of the next decade.

The riff have been inspired by a spluttering motorboat engine works brilliantly, as the band deliver a powerful performance, on a song that deals with the struggles of a man trying to find a job. Very Springsteen in philosophy, but very Styx in execution. One of the standout moments on Pieces of Eight.

This song follows straight on from moody album opener A.D.1928 on Paradise Theatre. It has a high stepping tempo that swings as much as it rocks. This has a sparkling sense of fun and nostalgia that sets the tone for the rest of the album. An inspired performance from a band on top of their game.

A masterful epic that sweeps through Equinox. But what may surprise is that it’s effectively a hugely critical look at America’s recent history. Coming as it did just a year prior to the country celebrating its bicentennial, it’s a somewhat bold statement from a band usually know for being ‘safe’.

An outlaw song done Styx style. It has a brusque, fiery attitude, building on a slightly laidback, almost sorrowful start into a full on gallop. Young’s guitar solo is one of his best, and while the song has a bleak climax, nonetheless it still retains an indomitable streak. The most thrusting song on Pieces Of Eight.

The title track from the band’s breakthrough album, this is the song that best represents everything for which Styx have become celebrated. It is pomp rock with style, confidence, command and ingenuity. Despite the band weaving a magical musical tapestry, lyrically this is about separating reality from fantasy. And on The Grand Illusion, Styx show themselves to be perhaps the ultimate pomp paramours!