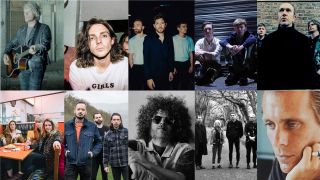 Welcome to the first November edition of Louder’s Tracks of the Week. This week, there’s been new releases from an array of different bands, including power-balladeers Bon Jovi and Australian hard-rockers Wolfmother. Like always, it’s up to you who wins the vote, and you can support your favourite artist via the poll at the bottom of the page.

Be sure to check out our Spotify playlist for updates on Tracks of the Week each week. For now, a look back at last week's winning song.

Bon Jovi have released a brand new single and video entitled Unbroken. A tribute in the form of a power ballad (what Bon Jovi do best) to veterans and their service dogs, with all proceeds of the song being donated to the Patriotic Service Dog Foundation. So if that’s not a good enough reason to go and listen to the song, we don’t know what is.

After signing to label Better Noise Music (Papa Roach, Motley Crue, Five Finger Death Punch), AWOLNATION are back with a brand new single, The Best, which is the debut single taken from the band's upcoming 2020 album. If you haven’t heard from the band beside from their 2011 hit Sail, this new track is definitely one to chuck on to kickstart your day.

Twin Atlantic have continued their return by releasing their new track, Novocaine. Taken from their upcoming forth release, POWER, the song shows the band have progressed into fully-fledged hitmakers and this is only shadowed by their recent signing to Virgin EMI. Their forthcoming LP is set to be released January 24.

Following the release of their debut album earlier this year, Imperial Wax have released their latest offering via Louder Than War Records, entitled Bromidic Thrills. If you’re yet to hear about Imperial Wax, the band formed in 2018 and is made up of the same bassist and drummer from post-punk band The Fall. Bromidic Thrills features jangly, heavy guitars and noteworthy vocals from Sam Curran.

Alt-rock band Gold Key have released their new single Sweet Darkness ahead of their new album, set for release in early 2020. The band have been hidden in North Wales recording this follow-up to their acclaimed debut, Hello, Phantom, and are a band to look out for next year.

Australian rockers Wolfmother have teamed up with Chris Cester from rock band Jet to release their brand new song, Chase The Feeling. The pair have known each other for years and finally decided to team up when jamming together. Chase The Feeling is just the first taste of new Wolfmother material that’s coming in 2020.

London-based alternative band Sisteray have released their anarchist new single, All Boys Club, alongside a statement which points the finger at PM Boris Johnson for his “sexist, homophobic comments.” The band worked with the same names behind Pete Doherty and A$AP Rocky for the single and are currently on tour across the UK.

Pillow Queens, aka an indie-punk queer band from Dublin, have just released a new video and single entitled Brothers. After the band lost their close friend, they decided to write a tribute to him and all the men in their lives with the track. The song comes ahead of their long-anticipated 2020 debut album.

Band Sick Joy have just released their new single, History, ahead of their UK headline tour this month. Coined their best release to date, History is grungy and cool and follows on from their new EP, Them Days, which was released earlier this year.

Art-punks Deliluh have just released the title track to their upcoming album (November 15) called Beneath The Floors. Based on a haunting, the song follows a storyline of a protagonist and was written by frontman Kyle Knapp whilst taking the GO Train near Toronto. The band tour Europe throughout November.

Vote for your favourite song here!