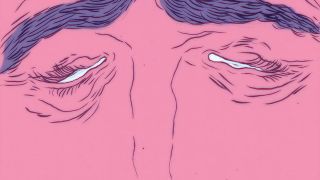 WAIT! DON'T GO ANYWHERE! Unlike most indie bands who say this sort of thing, Orions Belte actually do sound the part.

New single Joe Frazier is apparently some kind of tribute to Smokin' Joe, the boxer who beat Muhammad Ali in the so-called ‘Fight of the Century’ in 1971. You can't tell that it from the video by Vice illustrator Steph Hope - which is all jerkily-drawn scenes of urban dread and psychedelic angst - or from the song itself, which swings on guitarist Øyvind Blomstrøm's sweet slo-mo guitar licks.

'Some days I feel like I'm losing you all,' sings vocalist and bass player Chris Holm. 'Then I put on that cruise control/ Baby, it's all that I got' .

There's literally no mention of how Frazier coped in those difficult opening rounds back in 1971, or the dazzling left hook that sent Ali to the floor in the 11th. But what can you do, it's just a song not a fucking Wikipedia page, pal.

Listen to it, it's lovely:

Orions Belte's debut album, Mint is out 17 August, via Jansen