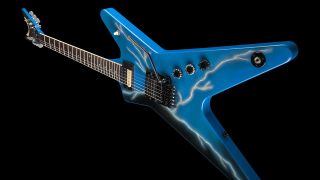 One of the many things that attracted rock fans to the wonder of Pantera was the playing of their guitarist, Darrell ‘Dimebag’ Abbott. Mixing that unmistakably laid-back Texan attitude with a style that, while technical in the extreme, dovetailed into the brutal music perfectly, he was well on his way to becoming one of the ultimate rock guitar heroes before he was murdered, shot and killed while on stage with his post-Pantera band Damageplan on December 8, 2004.

Dimebag’s main guitar throughout his career was an instrument he won at a Dallas guitar competition in 1982, a Dean ML that he subsequently dubbed the ‘Dean From Hell’. Dean are honouring both the man and that unique guitar with the very limited-edition – just 100 worldwide – USA Dimebag Commemorative ML, using Dimebag’s original as a reference to come up with something truly special.

When Dime won the guitar it was maroon in colour, but his long-time friend Buddy Blaze repainted it blue and applied an airbrushed lightning bolt. That iconic finish is recreated by hand on each Commemorative ML, and the spec, which includes Bill Lawrence and DiMarzio pickups, a top-mounted Floyd Rose Original and DBD traction control knobs, is followed to the letter.

The mahogany neck features the classic V-profile that set Dean guitars apart back in the day, while a perfectly finished mahogany body gives the tone a depth that works beautifully with the high-output pickups. Although this guitar sounds monstrous with a high-gain rock tone, it can effortlessly deliver more restrained styles too, including jazz. And, take it from us, it’s a dream to play.

The quality of the craftsmanship is impressive to say the least and, at £5,824, this is an American icon, just like the man being commemorated. Play one if you can.

Pickups were an integral component of Dimebag Darrell’s iconic tone

American Deans usually featured a pair of either zebra or double-creme DiMarzio Super Distortion humbucker pickups, but Dime (pictured) retrofitted his ML with a Bill Lawrence L-500XL in the bridge position. The latter may not be as familiar a name as some others, but that pickup has graced many a rock record, one being Extreme’s 1990 album Pornograffiti, via guitarist Nuno Bettencourt’s Washburn N4.

The unit in the Dean From Hell guitar was made by BL’s Jzchak Wajcman. With a DC resistance of 11.2k, it’s a high-output pickup that features two thin magnetic rails set in black resin, rather than the more traditional rows of separate pole pieces. When used for rock, it really helps to accentuate the guitar’s harmonics, as is evident from Dime’s aggressive tone. The L-500XL, as well as other Bill Lawrence pickups, is still available today.