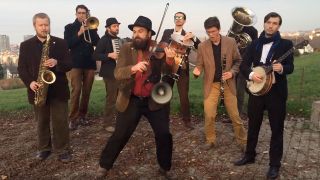 The traditional Russian klezmer troupe Dobranotch have harnessed the power of Rammstein for this truly brilliant rendition of Du Hast.

You’ll notice there’s much less pyro involved in the Dobranotch camp – seemingly recording the video in a nearby park – but you can’t fault their musicianship. Based in St. Petersburg, Dobranotch are a premier klezmer band with five albums under their belt and a career spanning over 15 years. And now they’ve turned their hand to industrial metal!