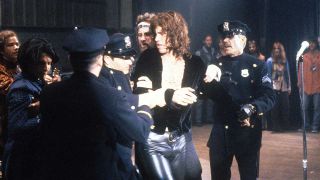 Val Kilmer being apprehended by the police in a scene from the film 'The Doors', 1991 (Image credit: Archive Photos / Getty Images)

Sometimes the resulting movies can be more fun to watch than when they do it right, as illustrated by this chronological collection.

If Peter Capaldi really could go back in time he might think twice about playing George Harrison in this turgid waste of three hours. Mind you, he survives relatively unscathed compared to Mark McGann, whose Lennon is akin to a soap opera simpleton.

An overly glossy and shamelessly fictionalised yarn that attempts to make Latino rocker Ritchie Valens appear much more interesting than he actually was. Also, Lou Diamond Phillips’ male model looks are a far cry from the chubby and awkward real deal.

On paper, Dennis Quaid as rock‘n’roll wild man Jerry Lee Lewis looked a good idea, but he appears to be working from the script for The Foghorn Leghorn Story. And the less said about his terrible lower league lip-synching the better.

Self-confessed Jim Morrison fanatic Oliver Stone opts for bombast and meandering philosophical hokum, with the rest of the band barely getting a look-in. Val Kilmer’s dreamy-eyed shtick irritates throughout, as does Meg Ryan in the ornamental role of paramour Pam.

Cheer up, weepy teens; your telly show heroes were infinitely more fun than the dullards tasked with telling their tale. The side order of commentary on cynical and manipulative puppet masters is way too overcooked, thanks to a ludicrous and clunky script.

Frank Sinatra died three months before this ham-aplenty portrait of his Vegas playboy years was released; maybe they gave him a sneak preview and it finished him off. Ray Liotta’s pantomime turn is less Ol’ Blue Eyes and more Been-Up-For-Six-Days-With-A-Mountain-Of-Speed Eyes.

Bad vibrations abound. Already on a hiding to nothing after the filmmakers were blocked from using actual Beach Boys recordings on the soundtrack, this bloated and bumbling miniseries runs adrift on wave after wave of cornball dialogue and peacenik clichés.

Laugh-out-loud for all the wrong reasons, hardly even flirting with factual accuracy, and W Earl Brown is far too timid for such a Meaty role. It’ll be of little surprise to learn it’s directed by Jim McBride of Great Balls Of Fire! infamy.

Made for TV, tasteless and tabloid-like, shockingly twisting the truth about drummer Rick Allen’s car accident. Joe Elliott is played by a barely sentient mannequin called Orlando Seale, to this day a name still not synonymous with the phrase “box office sensation”.

Don’t be misled by the title, this is an intentionally light-hearted retelling of ‘60s poppers The Turtles’ rise to fame. Singer Howard Kaylan, who wrote the script, did indeed break bread with Jimi Hendrix, but several other events covered are pure fiction.

Kevin Spacey: “I want to play Bobby Darin and do all the singing.” The voice of reason: “You’re twice the age of Darin in his prime, and you look and sound nothing like him.” Kevin: “What’re you trying to say? No third Oscar?”

Quite why Leo Gregory plays the lead role like a gurning young hippy Les Dawson is as big a mystery as Brian Jones’s actual death. “The film, like its subject, winds up all wet, floating without direction, and lifeless.” – Minneapolis Star Tribune.

Boy George’s insecurities and inner demons are laid bare in this serious TV drama, with ill-fitting flashes of humour. It’s hard not to snigger at the cheesy dialogue, the contrived set pieces, or Mark Gatiss’s bizarre portrayal of Malcolm McLaren.

The true-ish story of Dublin brothers who nearly joined U2 but flopped with their own band is a mess of am-dram overacting and niggling timeline discrepancies. Martin McMann’s earnest cameo as the title character is the only decent thing in the whole flick.

A ponderous misfire, tarnishing two cult artists. Penn Badgley is all cartoon angst as Jeff Buckley on the eve of a tribute concert to his late father, while Ben Rosenfield, in flashback as the elder man, is more wooden than either Buckleys’ guitars.

It’s hard to watch stony-faced Alan Rickman as Hilly Kristal, ruthless proprietor of the legendary New York club in the title, without thinking it’s Die Hard’s Hans Gruber with a perm. And as for Rupert ‘Ron Weasley’ Grint as Dead Boy Cheetah Chrome…

As you’d expect from writer-director David Mamet, this is a “stage-y” undertaking, heavy on sluggishly thespian verbal jousting between Spector and his murder trial lawyer. Al Pacino phones in his fallback interchangeable mad-eyed angry dude character; seriously, he could be playing anybody.

What started life as a perfectly serviceable jukebox stage musical loses its way when fleshed out with Sopranos-Lite subplots of questionable veracity. Clint Eastwood’s heavy directorial hand snuffs all the sweet-voiced joy out of the Four Seasons’ catalogue of hits.

The King’s notorious pow-wow with the president in 1970 is re-imagined with an over-reliance on whimsy and farce. Michael Shannon seems to have studied low-rent cabaret impersonators rather than Presley himself, while Kevin Spacey’s Nixon is little more than a cut-out curmudgeon.

Hardly anyone was feelin’ good after watching this universally panned account of Nina Simone’s troubled life. The film languished unreleased for four years, then elicited such reviews as (and these are genuine quotes) “woeful”, “shabby”, “dislikeable”, “thoroughly misconceived” and “abysmal piece of shit”.

Need something to watch? Here's 10 of the Best Rock Biopics ever made