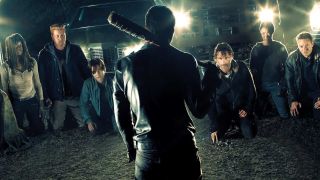 What you’re about to read contains spoilers, but then if you’re a regular viewer of The Walking Dead you’re probably used to things being spoiled. Like Season 7, for example.

The season started with one of the most tense and brutal episodes of any drama – a double execution cued up at the end of Season 6 – and the ratings reflected that. In the US, 17 million people tuned into to see who would be on the receiving end of Lucille, Negan’s barbed-wire covered baseball bat. Last week, episode 5 was viewed by 11 million.

Why? Because since that explosive episode, this season has been boring, flitting from one location to the next, spotlighting minor characters and failing to progress the storyline significantly and maintain the extreme violence and gore promised by the warning at the outset.

The truth is, zombie killing is no longer exciting. We’ve seen so many zombie skulls stabbed, squashed, shot and skewered that it’s no longer a big deal. And the revenge plot cued up by Lucille has been squandered. No one cares about the Crusty King and his pet Tiger. No one cares about what happened to whasserface. What they want is sustained gore, intense threat and weird sexual overtones.

And to that end, we’ve come up with the perfect ideas for plotlines. You can have them AMC, just stop boring us to death.

Our heroes stumble across a gang of deviant hillbillies who’ve started their own chicken ranch out in the desert, with barns full of bent-over-and-shackled zombies, alluringly kitted out in lingerie, with air freshener trees hanging from their suspender belts to cover the whiff, and a wall of glory holes (“If you knock their teeth out, they give you a very enthusiastic blowjob!”). In a deranged initiation ceremony, the hillbillies force the gang to have their way with some Rotten Hotties. Rick can’t get it up but Daryl takes to it with gusto – the guy hasn’t had a shag in seven seasons, after all – and the rest of the episode is spent trying to talk him out of his new-found fetish. Carl starts calling him ‘Stinky Fingers’.

Politics Is Rotten To The Core

Our intrepid heroes are captured by the occupants of Camp Snowflakes, fierce campaigners for Zombie Rights. “Zombies are people too!” bleats their leader. “Or, like, they were, anyway.” The Snowflakes believe that being undead is a valid lifestyle – sorry, deathstyle – choice and that pro-lifers like Rick and co need to stop oppressing our flesh-eating brothers and sisters and understand a little bit more. Zombie Rights has become a key issue in their current election battle for Camp President. Donald Grunt and Hilary Clit-Fell-Off battle it out in a tense election battle, but Grunt takes it. Exit polls reveal that voters were initially uncomfortable voting for a disgusting flesh-eating zombie who was unable to articulate any rational policies and displayed nothing but senseless aggression – and then they remembered it was like that before the apocalypse, anyway.

Let’s face it. Season 7 is really just a badly-conceived revenge fantasy that can only end one way. Hillbilly sexy time. To overcome the might of Negan’s army, our heroes form an unlikely alliance with the hillbillies and the Snowflakes and – after the Snowflakes have a stern word with the hillbillies about the rights of zombie sex-workers – together they overcome the baddies. Negan is caught and forced to his knees. Carl pokes one of his eyes out. Rick pummels his arms into mince with the baseball bat. And Daryll hands his undead body over to the hillbillies who take him back to the chicken ranch, bend him over and prepare him for an eternity of hard hillbilly anal. “It’s what Glenn would have wanted,” sobs Maggie.

10 reasons why The Walking Dead is metal as fuck