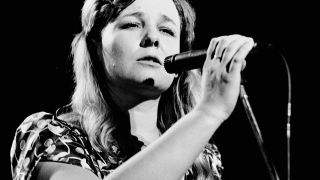 Sandy Denny was one of the most captivating voices of her generation, from the glorious highs of Fairport Convention and Led Zeppelin all the way through to her tragic, premature death at the age of just 31.

"She was one of the best singers I'd ever seen in my life," says her Fairport bandmate Richard Thompson.

Below, we join the story towards the end of Denny's life.

In 1976 Fairport Convention came home from tour in a parlous financial state, and Sandy Denny left the band for a second time. Her drinking escalated, and her black moods got deeper.

She began to make another solo record with her husband, Trevor Lucas, intent upon aiming at a more contemporary sound, but her voice was showing the strain, and often as not she would turn up to the studio late, if at all. Yet still she was capable of moments of wonder, such as on the haunted song No More Sad Refrains that would end up closing the album.

She delivered the record, which she had called Gold Dust, to Island in the summer of 1976, but the label shelved it, with no one quite sure what to do with it, or her, any more. It would be 10 months before it finally got a release, Island having coerced Denny into adding to it a perfunctory cover of Elton John’s Candle In The Wind, on which she sounded somnambulant, and retitling it Rendezvous.

Arriving as punk blew up, it vanished into an abyss and Island let go of her like yesterday’s news. At the beginning of 1977, Denny found out she was pregnant. She had often spoken to friends of wanting to have a child, but impending motherhood didn’t rein her in.

Georgia Rose MacLean was born on July 12 ,1977, three months premature. She was kept in an incubator in hospital for two months, effectively to be detoxed. Denny was no more able to look after her baby when she at last took her home.

“When Georgia came along we all thought it was going to be great for her and would make her happy, but it didn’t,” says Dave Pegg. “She and Trevor were having serious problems, and that caused an awful lot of grief.”

"At that point, I would see her sporadically and I was distressed when I did,” adds Richard Thompson. “She was drinking more, doing more drugs, and I would have a really bad feeling that some potential tragic outcome was on the cards. Sandy was a mess. Her baby needed protecting. But even in a situation like that, people have to come to their own realisation.”

Denny managed one final tour of the UK that November. Attendances were erratic, and so were her performances. The following March she took Georgia to visit her parents at their holiday cottage in Cornwall.

One afternoon, coming downstairs, she stumbled and fell, hitting her head on a stone floor. Afterwards she told friends that her mother had refused to take her to hospital, not wanting to be seen with a drunken daughter.

Back in Byfield, she began to have debilitating headaches. She was prescribed a painkiller, Distalgesic, that when mixed with alcohol can have potentially fatal side effects.

Whatever occurred during those next dark, desperate days, it was enough to convince Lucas to take Georgia away from her. On the morning of April 14 he boarded a plane to Melbourne with their baby, on a one-way ticket. That evening, a Thursday, a distraught Denny called a friend, Miranda Ward, who came to pick her up and drive her back to London.

The two spent the weekend at Ward’s flat. On the Monday morning, Ward went to work. She had arranged a doctor’s appointment for Denny for later that same afternoon and left a note, promising to return in time.

Ward had also asked a friend, Jon Cole, to look in on her. When Cole arrived at the flat, he found Denny unconscious at the foot of the stairs. She was rushed to hospital in a coma. When her condition didn’t improve, she was transferred to one that specialised in brain injuries.

Days after arriving at his parents’ house in Melbourne, Lucas flew back to London. Arriving at the hospital, he was told his wife was brain dead and was asked for his permission to have her life support turned off. In the event, Denny died naturally on April 21, 1978. She was 31. The coroner’s report recorded her death as a ‘traumatic mid-brain haemorrhage. Accidental.’

In the 40 years since Sandy Denny’s death, her recorded works have been reissued, remastered and re-evaluated. Today there is a more general awareness of her wonderful talent and the extent of her influence. In life she was unable to get out of the black pit she fell into; in death her light is undimmed.

“No one came anywhere near Sandy. She was the best,” says Ashley Hutchings. “She just had that very special quality when she sang a beautiful song. It broke your heart.”