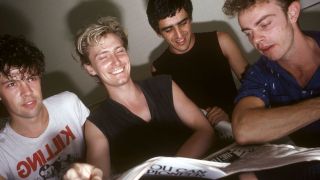 Earlier today we announced that Killing Joke are playing the Metal Hammer Golden Gods awards show – which is freaking nuts if you ask us. But if you’re not well-versed in the post-punk legends (or even if you are), we’ve put together this list of things you might not know about Jaz Coleman and co.

To be in with a chance of seeing Killing Joke play the Metal Hammer Golden Gods you need to win tickets by voting in the Golden Gods here. Good luck!