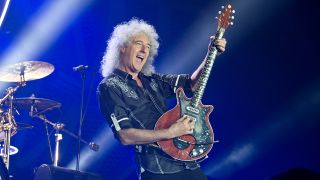 If Freddie Mercury was the pilot soul of Queen, lead guitarist Brian May was its engine, stoking the songs that elevated them into a stratosphere occupied by only a select few rock bands. He was a more than capable songwriter too, his dexterity allowing him to fuse elements of folk, prog, metal and classic pop into visions that were as grandiose as they were ambitious.

The seeds of one of Queen’s most expansive and exacting numbers were sown while May was recovering from illness during the sessions for Sheer Heart Attack. He dreamt of a great flood, funnelling the imagery into this bombastic prog-rock epic, featuring tape effects, a Japanese toy koto and Freddie Mercury’s vocal canon.

The seaside romance between Jimmy and Jenny (’A happy pair they made, so decorously laid / ‘Neath the gay illuminations all along the promenade’) unfolds over May’s own dramatic pomp-rock setting, the highlight of which is a huge guitar solo marked by delay and echo. The sprawling version on Live Killers finds him cutting loose in breathtaking style.

Arguably May’s most underrated Queen song, Dead On Time features one of Mercury’s finest vocals and a feast of terrific ensemble playing. May is on spectacular form, as nimble and agile as he is truculent and heavy. It also boasts a brief reprisal of Keep Yourself Alive and May’s recording of a thunderclap during a violent storm, prompting him to share the songwriting spoils with God on the sleevenotes.

Come the early ‘80s, Queen’s immersion in synth-pop didn’t always go down well with longtime fans. But The Works went some way to redressing the balance, reminding us all that May was the master of the mighty riff, not least on this straight-to-business hardline rocker. Despite the Cold War connotations and the Grim Reaper allusions, it quickly became a euphoric live favourite.

Locating his inner Benny Hill, May shares vocals with Mercury on this shameless celebration of the fuller female form and the male libido. Cue references to stiff bones, blue-eyed floozies and “big fat Fanny”, the naughty nanny. Issued as a double A-side with Bicycle Race, the other thing that made its rocking world go round was May’s evil guitar lick.

May’s intriguing swerve into “sci-fi skiffle” required him to take the lead vocal himself on this oddly endearing tale about space travellers who return home to find that Einstein’s theory of relativity has pissed about with time and all their loved ones are now dead or infirm. The use of 12-string acoustic guitar teases out the folkier, stranger elements here.

Essentially Freddie’s farewell, with May offering a measured solo and a suitably dramatic arrangement, The Show Must Go On was written as an enduring testimony to Mercury’s relentless drive. He delivers a grandstanding performance, despite May’s reservations about whether the frontman’s rapidly ailing health would allow him to even sing it. Downing a stiff vodka, Mercury assured him: “I’ll fucking do it, darling”.

Nobody bought Queen’s debut single, despite its banks of multi-tracked guitars, call-and-response vocals and killer chorus. Full of phased effects, it’s also a majestic example of May’s studio perfectionism, proving that the band had a heightened sense of grandiosity from the off. May was harder to please though, regretting later that “it never had that magic that it should’ve had.”

U2, Nirvana, Prince and Stone Temple Pilots are just a tiny handful of those who’ve covered this unassailable stomp anthem, taken from 1977’s News Of The World, initially inspired by a rousing crowd rendition of You’ll Never Walk Alone after a Queen gig in Birmingham. Mercury leads the rap‘n’clap charge, of course, but it’s May’s roaring solo that brings the thrills.

Written in hospital after May had been laid low by hepatitis, Now I’m Here was written, as Mercury put it, “to show people we can still do rock‘n’roll, [that] we haven’t forgotten our roots.” It was also a salute to Queen’s support dates with Mott The Hoople in ’74 (’Down in the city / Just Hoople and me’). From its chugging intro to its explosive chorus, this is Queen at their most eruptive.

The 10 greatest Queen memes
The 10 Worst Songs By Queen