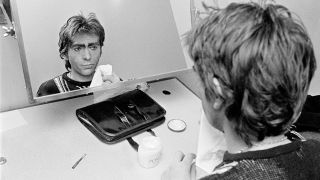 One of the most creative and forward-thinking artists of our times, the depth and breadth of the ex-Genesis frontman’s solo career has encompassed world music, edgy power-pop, film soundtracks, uplifting anthems, activism, introspection, and no few big hits. Any mere top ten will always throw up notable sins of omission on a canvas so broad, yet here’s ten of the best – each one revealing a different aspect of Gabriel’s multi-faceted output.

Forever defined by its video and perhaps historically marred by over-saturation and exposure, Gabriel’s first US No. 1 is essentially five-minutes of penis innuendo (Big Dipper, Sledgehammer, Train, Bumper Car) and a request to be shown ‘round your fruitcage’. It’s not exactly ambiguous. Though lighter tonally than much of his other work, the spritely horn section – the Stax label’s house band – adds some spritz to a tempo just the right side of plodding.

Once referring to himself as a “purveyor of amateur psychiatric clichés”, this study in amnesia is a classic example of Gabriel’s ability to write a killer pop song shot through with an unnerving weirdness. It’s not a million miles away from same-era Bowie, though the chorus is more expansive than anything he’d attempt. Heavily processed throughout and relatively guitar-heavy, it also has a bucket-load of groove driven by Tony Levin’s squelchy bass/chapman stick.

Out of the blocks with an edgy, unsettling circular motif, the staccato, syncopated rhythm repeats throughout, bringing a marked starkness and sense of space to a jittery little tale of jealousy loosely placed in the idea-space of animal testing. Widely covered, nu-metal also-rans Coal Chamber once tackled it with Ozzy on vocals: on balance, you’d rather take the ECT.

Presaging his marriage break up, and the pain of relationships – Gabriel: “handling failure is one of the hardest things we have to learn to do” - this universally-themed duet was originally pitched to Dolly Parton. Like R.E.M’s Everybody Hurts, its everyman subject matter, simply expressed, has elevated it into mass public consciousness. The video – Bush and Gabriel in a continuous one-shot embrace – further capitalised on the mastery of the medium he’d conquered with Sledgehammer earlier that same year.

Like Solsbury Hill, another song inspired by ramblings in the great outdoors - this time the mountains bordering Palm Springs - Gabriel examines the Native American experience in one of his most evocative and expansive tracks. An early digital recording, the extensive use of samples (on the then-new Fairlight CMI) adds chiming, looped rhythms and deep warm layers to a largely restrained performance.

Often used as his set opener, this Jung-inspired tidal-wave of drumming charts territories far, far from some of the other pop-nuggets on this list. Filmic in scope and feel – it was recycled into the Birdy soundtrack – it’s an early foreshadowing of both this and Passion, his soundtrack to The Last Temptation Of Christ. Less a song, more of a mood setter, the use of a tribal Ghanaian war dance as an entry point into the collective unconscious is, whatever your thoughts on such things, superlatively effective.

Invariably misheard up and down the playgrounds of Britain’s comprehensive schools, the song’s French refrain - Jeux Sans Frontieres - was a linguistic challenge, sometimes manifesting as ‘she’s so funky, yeah?’ and (the admittedly closer) ‘she’s so hot, Pierre’. Brimming with 80s paranoia; war games as children’s games, Olympic neurosis, nuclear attack, its stark message is chillingly reinforced by David Rhodes’ Fripp-style atonal guitar and the eeriest use of whistling in rock. Gabriel’s genius in using the nursery to nurture the nightmare makes it a hugely powerful anti-war polemic.

An incredibly assured anthem, Gabriel adds an AIDS metaphor to his clutch of 80s fears and worries. Daniel Lanois’ peerless production still sparkles 30 years later, bass stalwart and all-round-don Tony Levin plays out of his skin and Stewart Copeland’s hi-hat (simulating the rain of the title) is a drummer’s masterclass. Watery themes pepper Gabriel’s career (Here Comes The Flood, Down The Dolce Vita), and a once-mooted movie idea – Mozo - was to tell of villagers punished by blood-red rain, the name mysteriously referenced in all of the above plus On The Air and Exposure.

As breezy and sun-kissed as the spiritual stroll that inspired it, Gabriel’s post-Genesis debut ploughs an atypical autobiographical furrow, musing on the break with the past and what the future might bring. As with many bona fide artists, there’s an emotional distance at play, almost viewing himself and his feelings in the third person. The song’s simplicity – relative of course, it’s in 7⁄4 – and optimism, have seen it endure across the spectrum of TV and film, now firmly established as an authentic classic.